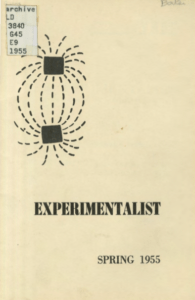 Cover of The Experimentalist, 1955 by Alice Doorley

I’ve been involved in literary magazines at SUNY Geneseo since my freshman year. In fact, I selected Geneseo because it housed two different literary magazines. However, despite being very involved in publications here, I knew so little about their history. Gandy Dancer may have its entire history documented here on our website, but what about MiNT Magazine? What about Opus or Our Time or The Experimentalist? Who is documenting their history?

This inspired the Geneseo Literary Magazine Project. Over the past year, I have been scanning, digitizing, and uploading old literary magazines made by Geneseo students. By the end of the year, they should be available on WordPress, where I’ve detailed my process and the history of Geneseo’s journals.

In the hopes of enticing you to check out my work, I want to tell you about some of what I’ve learned during this project. There were nine known magazines at Geneseo from 1955 onward. The first magazine, The Experimentalist, was the longest running Geneseo magazine, lasting until 1990. Our Time started in 1985 and had a much more contemporary style then The Experimentalist; it was the first magazine to be produced on a computer, and it lasted until 1997.

Ruby Bayou, Equinox, Speak, and Subterranea were all short-lived publications from the 1990s or early 2000s, Speak being the first publication with an online component. Finally, MiNT Magazine and Opus were started in 2003, and Gandy Dancer was founded in 2012.

In addition to learning more about my college and the students who attended it, I have come to appreciate the way that literary magazines express the sentiments and thoughts of their editors, the way they provide a forum for writers to express themselves, the way they represent the times and communities they originate from. Literary magazines are so important to colleges in general and to Geneseo in particular, and it’s important that my project not be the end of the effort to document and remember them. Hopefully, this project will inspire a trend across college campuses to study their old magazines and will spur a new love for them among the students which will allow current and future magazines to develop and thrive.

Comments Off on The Geneseo Literary Magazine Project