Is Poetry Dead? Let’s Settle It Once & For All

It seems like every three months or so, I find a new article that declares poetry is dead—or at least questions how long it will take for poetry to die. The Washington Post did so two years ago. Newsweek did the same ten years before that. Heck, Thomas Love Peacock claimed poetry was dead in “The Four Ages of Poetry” all the way back in 1829! It doesn’t really make sense to me, especially since the majority of people who shout from rooftops about poetry’s death rarely explain why poetry is supposedly dead, except “nobody reads it anymore.” But with every declaration of the “death of poetry,” hundreds of poets fly in to defend the genre and prove the naysayers wrong. By 1989, poetry had been declared dead so many times that Donald Hall called for “death to the death of poetry”—and it’s been sixteen years since then, with more and more declarations each year. There are so many people on both sides of the argument that poetry might as well be characterized as the Schrödinger’s cat of the literary world.

Our solution, then, is to open the box.

And when we do, we find it’s not a coffin, but a buzzing hive, whether you can see the resident poet-bees working inside or not. Rather than rehashing arguments that have been made a thousand times, I propose a logical conclusion: if you have to keep declaring, over and over, that poetry is dead, it can’t actually be dead. Poetry can’t possibly die if people keep talking about it, and announcing its supposed death counts as conversation. And in the meantime, the poets buzz on, crafting and creating, regardless of what internet bloggers, journalists or social critics have to say. 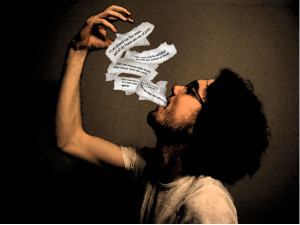 It’s hard to say why we—as writers, readers, and human beings—need poetry in the first place, because the reasons for writing poetry are so specific to each poet that it’s impossible to make a generalization about an overarching why. I write poetry because it’s a way for me to express empathy and experience catharsis in an alternate storytelling medium—poetry allows me to communicate thoughts and emotions that may not come across as clearly in a short story or essay, and it allows me to do so in ways that continually surprise me. I write in the hopes of establishing empathetic connections between readers who may never meet, and that spark of human connection is why I need poetry. But I can only speak for myself—I can’t say the same for other poets. I trust that I need poetry, though, and I think other poets feel that too, considering our dedication to it despite countless declarations of its death. (Here’s a great TED talk by Stephen Burt about why we need poetry.)

In a way, the establishment of National Poetry Month in 1996 could be viewed as a sign that poetry is not on its way out, but is instead becoming immortal. Held every April, National Poetry Month celebrates poetry in all of its forms, spreading from live readings to bookstore shelves to classrooms. Now in its 19th year, the literary celebration has spread internationally. People all over the world participate in National Poetry Writing Month, or NaPoWriMo, writing one poem a day for the thirty days of April. This kind of interest and dedication is a sure sign that poetry is alive and kicking.

Here at Gandy Dancer, we can’t shut up about poetry, and it shows in our submissions for Issue 3.2. This semester alone, we’ve received over two hundred poetry submissions, written by poets hailing from campuses across the SUNY system. The variety within our submission pool has been staggering: from prose poems to sonnets, portraits to pastorals, undergraduates to PhD students, we’ve seen work unlike anything we’ve read before. The poems are abuzz with sociocultural commentary, too—many submissions deal with topics such as environmentalism, political corruption, and issues surrounding race and LGBTQ+ rights, just to name a few. The vividness, fervor, and insistence of the poetry we’ve received gives me faith in the continuing lifespan of poetry itself, especially writers at the undergraduate level. These poets clearly have something to say, and they aren’t keeping quiet about it. We consider it an honor and a privilege to introduce a small sampling of these poems to the rest of the world.

The conversation doesn’t seem to be dwindling elsewhere, either. Every year, new and established writers publish collections of their work, which seem to only be increasing in quantity with the rise of the self-publishing industry and e-books. Forty-five states in the U.S. name state poet laureates, and even Wikipedia has entire webpages dedicated to “years in poetry,” from the beginning of recorded history up to the present day. And just yesterday I pulled Nicole Terez Dutton’s collection If One of Us Should Fall off of my bookshelf and shared it with someone who has never written a poem before. (Their response after reading? “That was profound.”) The way I see it, poetry is hardly even close to dying—it continues to spread, grow, evolve, and evoke responses in its readers, in Geneseo and beyond. The cat is alive. Poetry is still everywhere we look, and I trust that the world won’t stop talking about it for a long time.

Comments Off on Is Poetry Dead? Let’s Settle It Once & For All