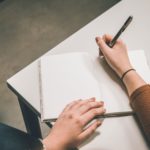 Photo by NeONBRAND on Unsplash

Picture this: the perfect writing playlist is pulled up on Spotify. Your favorite pen rests beside a pristine notebook (you needed another brand new one for this project, of course), and the coffee you reheated in the microwave steams gently in front of your fully charged laptop. It’s perfect. Now, you think, I’ll finally be able to start my next big writing project.

Until, of course, your cat sits on your lap and your phone buzzes. You can’t possibly work under these conditions. Chalking it up to insurmountable circumstances, you leave your laptop—and your writing—for another, more auspicious day.

If the idea of starting a brand new project makes you break out in hives, you aren’t alone. When I start a project there’s only one technique that makes the rash disappear. First, there’s an idea—or maybe only a kernel of an idea—that won’t let go of me. This clingy thought is generally followed by a note in my phone that grows with every wake-up-in-a-cold-sweat brainstorm I have. Once the note resembles the red-string corkboard of a conspiracy theorist, I know I have enough to do the nitty-gritty planning. And then, all that’s left is to . . . you know, actually write it.

If all that sounds completely impossible to you—don’t fear! Every piece of art and entertainment you’ve ever consumed had to be started at one point, and successful writers of all stripes have their own opinions on starting new projects.

Anne Lamott, for instance, has this to say: “Keep your butt in the chair. Butt in chair. Get that tattooed on your left arm, butt in chair.” In her book Bird by Bird, she discusses the importance of starting a habit of writing at the same time every day. “You sit down, I say. You try to sit down at approximately the same time every day. This is how you train your unconscious to kick in for you creatively.” Clearly, her method for starting—and sticking with—a new project is routine mixed with a healthy helping of determination.

On the other hand, when Richard Ford talks about starting his fifth novel, he says, “I kind of started the research on it four years ago and just didn’t have the moxie to get going on it. . . I just decided, hell, I’m 75, I better do it before I drop dead.” A bit of a different approach, then. Instead of a lack of routine he cites a lack of ‘moxie’ standing between him and a finished product. Evidently, fear of death is a good motivator.

Author Brandon Taylor approached starting a new project completely differently. “I have this very technical approach to almost everything,” he’s quoted as saying. When beginning his novel Real Life he began by making lists that ranged from reasons he had previously failed to write a novel, things he considered himself good at, scenes he wanted in the book, and more. Here, there is no mention of ‘moxie’ or adherence of a behind into a seat. Instead, Taylor’s approach was methodical and slow—exactly how he likes it.

He approached his debut novel with the method that worked for him. You might not be cut out for the lengthy phone-note model that I prefer. Maybe the idea of making a Brandon Taylor-esque list makes you shudder. And that’s the kicker.

There is no perfect, end-all, be-all way to start a new writing project. Instead, there are a thousand good ways to start your next writing project; a million workable opportunities for you to seize. Perfection is the enemy of perseverance, so in the immortal words of Anne Lamott: get your butt in that chair.

Comments Off on Starting A New Writing Project