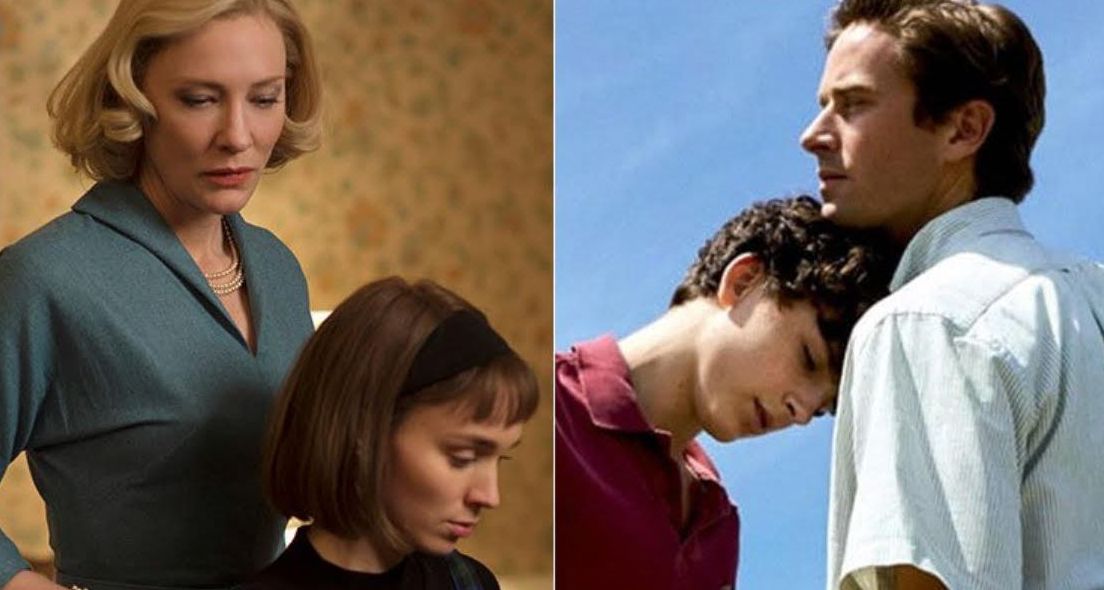 This play was first written in 2003 as part of McCraney’s application to Yale’s School of Drama. In Moonlight Black Boys Look Blue is based on McCraney’s own experiences growing up. After his admission to Yale’s School of Drama, McCraney put the play on hold due partly to his mother’s death and because he had written visual cues in the play that were unable to be staged.

After a few years, McCraney showed one of his film professors the script. The script eventually found its way to director Barry Jenkins through the Miami arts scene.

The movie and play are very similar, and the movie is described by goodreads.com as, “A timeless story of human connection and self-discovery, Moonlight chronicles the life of a young black man from childhood to adulthood as he struggles to find his place in the world while growing up in a rough neighborhood of Miami. At once a vital portrait of contemporary African American life and an intensely personal and poetic meditation on identity, family, friendship, and love, Moonlight is a groundbreaking piece of cinema that reverberates with deep compassion and universal truths. Anchored by extraordinary performances from a tremendous ensemble cast, Jenkins’s staggering, singular vision is profoundly moving in its portrayal of the moments, people, and unknowable forces that shape our lives and make us who we are.” IMDb also notes that the film is told through three different points in the protagonist’s life, Part I. Little, Part II. Chiron, and Part III. Black. Each of these time periods provide a look at how the main character changes as he grows up. The film stars Trevante Rhodes as Black, André Holland as Kevin, Janelle Monáe as Teresa, Ashton Sanders as Chiron, Naomie Harris as Paula, and Mahershala Ali as Juan.

The trailer to the movie can be found here: https://www.youtube.com/watch?v=9NJj12tJzqc.

Aciman began writing Call Me by Your Name in 2005. According to mentalfloss, “André Aciman wanted to take his wife and children on a vacation to a Mediterranean villa but the plans fell through. Instead of springtime relaxation by the seaside, the author spent three months fictionally exploring the Italian Riviera fictionally by writing Call Me By Your Name”. The novel was published in 2007 by Farrar, Straus and Giroux.

Though it isn’t clear exactly how director Luca Guadagnino got involved, the film adaptation was released on November 24, 2017. There are some differences between the novel and the film, just like with any adaptation, but most of the plot remains the same. Sony Pictures Classics says this about the basic plot: “It’s the summer of 1983 in the north of Italy, and Elio Perlman (Timothée Chalamet), a precocious 17-year-old young man, spends his days in his family’s 17th century villa transcribing and playing classical music, reading, and flirting with his friend Marzia (Esther Garrel). Elio enjoys a close relationship with his father (Michael Stuhlbarg), an eminent professor specializing in Greco-Roman culture, and his mother Annella (Amira Casar), a translator, who favor him with the fruits of high culture in a setting that overflows with natural delights. While Elio’s sophistication and intellectual gifts suggest he is already a fully-fledged adult, there is much that yet remains innocent and unformed about him, particularly about matters of the heart. One day, Oliver (Armie Hammer), a 24-year-old American college graduate student working on his doctorate, arrives as the annual summer intern tasked with helping Elio’s father. Amid the sun-drenched splendor of the setting, Elio and Oliver discover the heady beauty of awakening desire over the course of a summer that will alter their lives forever.”

Call Me by Your Name has been nominated for many awards including three Golden Globes and four Academy Awards where it won Best Adapted Screenplay in 2018.

The trailer can be found here: https://www.youtube.com/watch?v=Z9AYPxH5NTM

3.Carol directed by Todd Haynes, based on The Price of Salt by Patricia Highsmith

W. W. Norton and Company, Inc., and independent publishing incorporation, praises the novel, The Price of Salt, saying that “Patricia Highsmith’s story of romantic obsession may be one of the most important, but still largely unrecognized, novels of the twentieth century. First published in 1952 and touted as “the novel of a love that society forbids,” the book soon became a cult classic. Based on a true story plucked from Highsmith’s own life, Carol tells the riveting drama of Therese Belivet, a stage designer trapped in a department-store day job, whose routine is forever shattered by a gorgeous epiphany—the appearance of Carol Aird, a customer who comes in to buy her daughter a Christmas toy. Therese begins to gravitate toward the alluring suburban housewife, who is trapped in a marriage as stultifying as Therese’s job. They fall in love and set out across the United States, ensnared by society’s confines and the imminent disapproval of others, yet propelled by their infatuation. Carol is a brilliantly written story that may surprise Highsmith fans and will delight those discovering her work.”

Highsmith’s novel is based off of a few experiences she had. One of these experiences, very similar to the beginning of both the novel and movie, included meeting the married Kathleen Wiggins Senn at Bloomingdales during the Christmas of 1948. Senn was described as a “blondish and elegant” woman, much like Carol in the novel and film. One of Highsmith’s former lovers, Ginnie Catherwood, also gave her the inspiration to write the character of Carol. Therese’s character, as Highsmith recalled in one of her notebooks, was based from Highsmith’s “own bones”, according to The Los Angeles Times. The novel, published in 1952, was published under the pseudonym, Clarie Morgan. In 1990, after the book had achieved a great deal of success, Highsmith republished it with her own name and changed the title to Carol, which also became the name of the film adaptation released on December 17, 2015.

The film stars Cate Blanchett as Carol and Rooney Mara as Therese. Sarah Paulson, Jake Lacy, and Kyle Chandler also play minor roles in the film. Carol was nominated for five Golden Globes and and six Academy Awards in 2016.

The trailer can be found here: https://www.youtube.com/watch?v=679wr31SXWk

4.Love, Simon directed by Greg Berlanti, based on Simon vs. The Homo Sapiens Agenda by Becky Albertalli

Simon vs. The Homo Sapiens Agenda was published in 2015 by Balzer + Bray and is Becky Albertalli’s debut novel. A Plus interviewed Albertalli regarding the inspiration behind her successful novel. “When I think back to what I consider to be my biggest influencers,” she says, “the books that made me want to write, I’m thinking The Perks of Being a Wallflower and also an Australian YA author named Jaclyn Moriarty who’s written YA classics — they’re like cult favorites. Those are the stories that I connected with as a reader and the aspect of them I most connected with was just the characters feeling real, like real people I could know. I could find these moments in those stories where I didn’t realize anyone else had those thoughts that I had and they made me feel a lot less alone. I think that has always been at the heart of my process — or like that’s my goal, that’s what I try to write towards. To create characters who feel like real people, and not just like descriptions and characteristics on a page.”

Rotten Tomatoes says this about Love, Simon: “Everyone deserves a great love story. But for seventeen-year old Simon Spier it’s a little more complicated: he’s yet to tell his family or friends he’s gay and he doesn’t actually know the identity of the anonymous classmate he’s fallen for online. Resolving both issues proves hilarious, terrifying and life-changing. Directed by Greg Berlanti (Riverdale, The Flash, Supergirl), written by Isaac Aptaker & Elizabeth Berger (This is Us), and based on Becky Albertalli’s acclaimed novel, LOVE, SIMON is a funny and heartfelt coming-of-age story about the thrilling ride of finding yourself and falling in love.” The film was released on March 16, 2018 and stars Nick Robinson as Simon, Jennifer Garner as Emily, Josh Duhamel as Jack, and Katherine Langford as Leah.

The novel, Simon vs. the Homo Sapiens Agenda, won the William C. Morris Award, which is given to a book written for young adults by a previously unpublished author.

The trailer can be found here: https://www.youtube.com/watch?v=E0cbWdlQg_8

5.The Danish Girl directed by Tom Hooper, based on Man into Woman: The First Sex Change by Lili Elbe

The Danish Girl is based off of the true story of Lili Elbe, born with the name Einar Wegener in 1882 in Vejle, Denmark. Wegner first realized that he was transender when Anna Larssen missed a meeting to model for Wegners’s wife, Gerda in 1908. Larssen suggested that Wegner dress up in women’s clothing and fill in for her. Wegner began to pose for his wife on an ongoing basis, and after a few years, he began to dress as a woman on a regular basis outside of being his wife’s model.Man into Woman: The First Sex Change is Elbe’s recollection of her experiences.

The Danish Girl follows Lili, played by Eddie Redmayne, on the journey to becoming herself as she undergoes sex reassignment surgeries and navigates the unforgiving social situations of the early 1900’s.

The film stars Eddie Redmayne as Einar and Lili, Alicia Wikander as Gerda, and Amber Heard as Ulla (a character based on Anna Larssen).

The trailer can be found here: https://www.youtube.com/watch?v=d88APYIGkjk

Both in print and on screen, these pieces of art have been able to tell their stories of LGBTQ+ reality. What adaptations do you consider great successes?

Comments Off on The Top Five LGBTQ+ Movie Adaptations