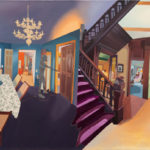 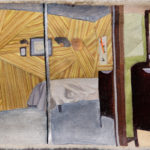 Room of Mirrors (oil and embroidery on canvas and linen) 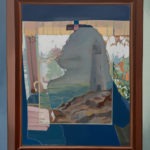 Self Portrait 2 (oil and embroidery on canvas and linen) 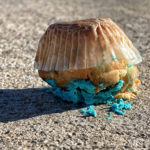 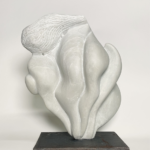 Underneath it All (soapstone) 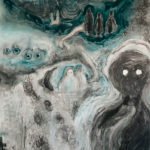 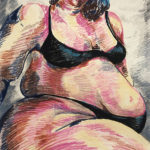 Home (in a body) (pastel on paper) 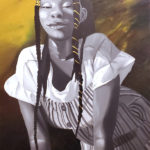 Wisdom (oil and acrylic on canvas) 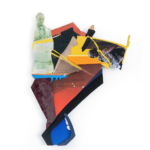 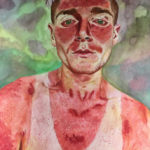 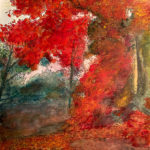 Maddie Hinrichs is an MFA candidate at the University at Albany. She received her BFA from the University of Lincoln-Nebraska in 2019. She works with oil painting and embroidery mediums that convey her memories of familiar interiors. The spaces she works with begin in reality and devolve into dreamscapes that reject logic and favor surrealism.

Sophia Montecalvo is a senior at SUNY Geneseo, set to graduate in May 2022.  Her major is English with a focus in creative writing. She loves spending time with her friends, reading, writing, and all things Star Wars.

Kailey Maher is a BFA artist in Ceramics and Sculpture at SUNY Plattsburgh. Her artwork mirrors a magnetic polarity of mediums: stone and ceramics, pushing against and pulling within. Her artwork reflects the effects of time—shaping and reshaping—not in minutes and seconds, but in a living lifetime of transformative movements of contractions and expansions. She works in a range of scale and mediums, inspired by the ephemeral language of the natural world’s ever-present cognizance.

Brielle Sarkisian is a junior at SUNY New Paltz. She is a BFA student in drawing and painting and has let her subconscious thoughts and anxieties make their way into her most recent work. By channeling her experiences into her art, she learns a lot about herself and her emotions.

Mollie Ward is a BFA student at SUNY Plattsburgh with a concentration in drawing and ceramics. Her work focuses on her relationship with and understanding of soft bodies, specifically her own body, in conversation with femme bodies in classical art. This exchange between classical art and her lived experience has influenced her recent body of work.

Brianna Olsen is a senior at SUNY Potsdam studying art studio, with a concentration in painting, and a minor in graphic design and new media. Her work explores the relationships with the people who have influenced her throughout her life. Color and texture are used to give the viewer an idea of who the subject is in terms of their personality, while the black and gray portrait itself establishes the moment as a memory.

Juliana Haliti is a painter and sculptor who makes work reflecting upon the blind faith of their childhood—their unknowing participation in racist and unethical capitalist systems.Their work has been exhibited locally and nationally. They received their BFA from the College of Saint Rose and their MA and MFA from the University at Albany. Haliti is also the art editor for the online publication, Barzakh magazine.

Erik Carrigan suffers from a rare disease known as Visual Snow Syndrome, which is an incurable disorder that gives his vision an active, static texture that leaves colors, shapes, and lighting difficult to distinguish. He was then diagnosed with vertigo. Further research proved it all may be neurologically related. This motivated Carrigan to return to school and become a student to further explore art as a means of translating how his eyes perceive the shared world differently.