7 Spooky Stories to Keep You in the Halloween Mood 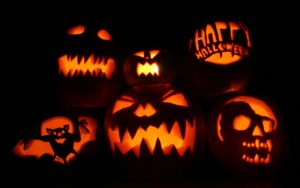 Halloween has just passed and it seems that with that, all the spooky energy has as well. Whether you dressed up as Wonder Woman, a clown, or someone from Game of Thrones for Halloween, nothing keeps the fun alive more than scary tales. If the success of the new film adaptation of Stephen King’s It is anything to go by, people love to be scared, so why not let the fun continue after Halloween has passed? Why else would there be a multi-million-dollar haunted house industry? Here are seven scary fiction pieces, perfect to keep the Halloween spirit alive even after the holiday has passed.

A newly widowed woman must deal with the hardships of living alone, especially when she is terrorized by a strange visitor who brings her face to face with death.

This is a classic, creepy Halloween tale college-student style. To those who hate when a story is too short: don’t fret, Khaw offers enough alternate endings to satisfy any mood.

In “The Vedlt”, Bradbury does what he does best and frightens us with the future. Anyone who’s ever seen the Disney movie Smart House will understand where the film makers might’ve gotten their inspiration.

Carroll completely turns horror fiction on its head with a creepy comic strip. It’s as scary as any story, but this one comes with pictures.

The mistress of mystery, Agatha Christie, is at it again with a story about a woman who must find out what a reoccurring dream about her new husband dying means for her future.

Pro tip: if you have a sensitive stomach, don’t read this before eating

Full disclosure: this story is more funny than spooky, but it’s definitely worth the read. If horror isn’t really your thing, you can still celebrate Halloween with this satirical piece from The New Yorker.

If you’re one of those people that likes to celebrate Halloween year-round, bookmark this for when you’re feeling nostalgic in April (or even a few days after Halloween, like now). Either way, whatever you do, don’t read these stories in the dark—you’ve been warned.