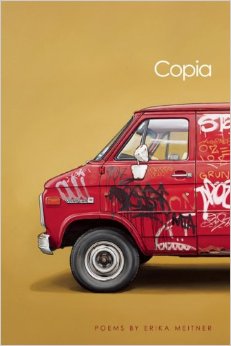 Erika Meitner’s latest collection of poems, Copia, is tied together with the common theme of desire. Although the collection is divided into three sections—which focus on our materialistic desires, the need for home, and an exploration of Detroit (which serves as an extended metaphor for infertility)—Meitner’s collection is surprisingly cohesive. Because Meitner relies on recurring images to explore both personal and cultural identity, reading her collection feels like reading a particularly enthralling story: there is a careful attention to narrative arc, character, and setting within the pages of Copia.

“Objects around us are not strangers/They are the ruins/in which we drown,” the speaker of the first poem in Meitner’s collection (“Litany of Our Radical Engagement with the Material World”) proclaims. Thus begins Meitner’s examination of our desire for the material. When Meitner visited Geneseo in October, she discussed her decision to write about the most un-poetic subject she could think of: Wal-Mart. The resulting poem, “Wal-Mart Supercenter,” showcases Meitner’s ability to take the banal—the trips to Wal-Mart people take everyday—and turn it into the poetic: the memorable. In this poem, Meitner grounds vignettes of parents trying to sell their children and women being carjacked with commentary on consumerism: “Which is to say that the world/we expect to see looks hewn from wood, is maybe two lanes wide,/has readily identifiable produce, and the one we’ve got has jackknifed itself/on the side of the interstate and keeps skidding.”

In a world where things are so present, so unyielding, it is complicated and devastating to lose the intangible, Meitner suggests. Throughout the collection, Meitner’s collective speakers seem to desire two things above all else: familial connection and a place to call home. When Meitner’s grandmother died, her family’s access to Yiddish did as well. In her exploration of her Jewish heritage in “Yiddishland,” she states in the opening lines, “The people who sang to their children in Yiddish and worked in Yiddish/and made love in Yiddish are nearly all gone. Phantasmic. Heym.” Here, Meitner’s connection to her family, and thus her familial history, is the disappearing intangible: as her speaker says in “Yizker Bukh,” “Memory is/flotsam (yes) just/below the surface/an eternal city/a heap of rubble…” Within her speakers’ struggle to maintain connections to their families and cultural heritage, another struggle arises: finding a place to call home. In this regard, geographic borders are a recurring theme within Meitner’s collection. “Everywhere is home for someone,” the speaker states in “Apologetics.” “We are placeless. We are placeful/but unrooted. We are boomburbs and copia. We are excavated/and hoisted. We are rubble. We are,” the speaker in “The Architecture of Memory” continues. From suburban Long Island to Niagara Falls to the rubble of Detroit, Meitner skillfully combines physical location with vivid, unexpected images and sounds to explore location and what it means to call a place home.

The title of Meitner’s collection, Copia, means ‘abundance,’ ‘fullness.’ But in the third part of the collection, we travel alongside Meitner to a place that is the opposite of ‘copia’—a place that is empty, in need of being re-filled and rebuilt: Detroit. Meitner’s decision to use Detroit as a metaphor for infertility and the desire to rebuild comes across loud and clear: “Inside me is a playground, is a factory,” the speaker of “Borderama” proclaims. “Inside me is a cipher of decay./[…]Inside me is America’s greatest manufacturing experience.” “Inside me is someone saying we will/rebuild this city,” the speaker seems to conclude. Meitner describes Detroit as a modern-day ghost town: in “And After the Ark,” the speaker describes a section of the city where artists have transformed the rubble of a largely-abandoned neighborhood into an open-air museum: “what was left behind was astounding:/dead trees wearing upside-down shopping carts on their hands/conference call phones, black and ringless, resting on a park bench.” Perhaps because of the poem’s setting in a neighborhood that creates art from the detritus so prevalent in Detroit, there is also a physicality, a sense of responsibility and call to action that arises within the poem (and the collection, as a whole): “And You Shall Say God Did It,” the speaker of “And After the Ark” continues, “but really it was racism/poverty/economics/inequality/violence.” How did we allow this happen, the speaker seems to be asking readers. How could we have prevented this?

The third section of Copia also presents a fascinating commentary on the blurred borders that exist between poetry and creative nonfiction: Meitner wrote the section of documentary poetry after traveling to Detroit with photojournalists Jesse Dukes and Kate Ringo to give voice to the people, the buildings, the graffiti through poetry. In “All That Blue Fire,” Meitner reconstructs, verbatim, an interview with a Detroit automobile factory worker: “they lay the motor down,/they put the heads on,/the spark plugs in.” In other poems from the section, her speakers become part of Detroit itself, as in “The Book of Dissolution,” in which the speaker is “a house waiting to fall in on/itself or burn.” On the whole, these poems feel honest, even hopeful about the future of Detroit. By traveling to Detroit to experience the city herself, Meitner, in some ways, transforms from a poet into a new journalist: responsible for reporting the facts, she delves into the personal—gives life to the city by documenting the lives of the people she meets and providing them with a space to tell their own stories. The investigative approach of Copia’s third section offers new possibilities for both Detroit as a city and poetry as a genre.

Meitner’s poems rarely provide concrete answers, but her sharp, evocative language invites readers into an important conversation on the hollowness of the American dream—the common desires that go unfulfilled everyday. Grounded in the objects that surround us, in the desire to have strong connections with family and heritage, in Detroit, Copia hooks readers into an important debate on the role of desire in everyday life, but also encourages us to enjoy the ride with its unexpected imagery and masterful use of sound and cadence. Meitner is skillful; she does not blame, but calls to action, “[b]ecause though this world is changing,/we will remain the same: abundant and/impossible to fill.”