The Art of the Experience: Considering Daniel Fleischman’s “Metropolis” 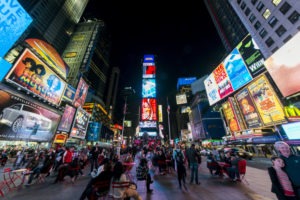 It seems odd to refer to a piece as being a clear love letter to the art of literary form. Isn’t that just a pompous way of saying that it is well-written? Perhaps not. In this issue of Gandy Dancer, Daniel Fleischman’s nonfiction short story “Metropolis” details the experiences of the author as he grew to accept life in New York City.

Certainly others have written of the city before, but there is a magnetism and finesse to Fleischman’s craft that elevates it from mere travelogue erotica. His pen is cast across the page with an unabashed exuberance; he frequently dips into descriptive prose and ruminates on not just the situations he finds himself in, but on the nature of civilization’s anthills. What does a city mean? It’s not really a question I ever considered, nor one that Fleischman explicitly answers. Unlike many authors describing a location, he does not attempt to solve the city, to have each element of it associated with some strong conclusion on the nature of life. Instead, he paints it.

Fleischman’s New York is awash with sight and sound and detail. He is more concerned with the art-deco architecture of certain buildings or the serigraph he finds in his basement than he is with the usual landmarks. As the atmosphere of the city chokes the speaker, Fleischman congests his story with long, eloquent, and evocative descriptions; the reader is forced to wade into the same sensory overload as the one living it. The pacing of the piece is slow and deliberate, mirroring the tentativeness of the young speaker as he is forced into an environment far out of his comfort zone. Illustrated with Fleischman’s words, the city is a multifaceted experience, not a series of necessary spots to check off a list.

Each small vignette, from his childhood to young adulthood, is just a piece of the New York City puzzle that transforms Fleischman. Rhetorically, each detail functions like a synecdoche; all of his experiences add up to describing the city as a whole. The theater he frequents becomes the city; the train trips he takes become the city; the nighttime streetlights, the “slabs of concrete and rebar,” the air that is forced exist between the clustered buildings. Cohesively, each element may seem superficially unimportant. Slowly, however, it builds to an understanding, not a conclusion.

Fleischman is clearly comfortable and confident in his authorial voice, and it comes across beautifully in this piece.  It is deliberate, thoughtful, measured, and absolutely drenched in atmosphere and skillful prose. So I invite you, dear readers, to share with the journey of Daniel Fleischman and step in to experience the “Metropolis.”

Comments Off on The Art of the Experience: Considering Daniel Fleischman’s “Metropolis”