On October 21st, SUNY Geneseo hosted its second Literary Forum Reading of the semester wherein Professor Lytton Smith introduced Aisha Sharif, a Cave Canem fellow and Pushcart Prize recipient, to read from her debut poetry collection, To Keep from Undressing. Given Sharif is an African American Muslim woman who was raised in Bible Belt, the collection tackles the issues closest to Sharif—that is, identities and the intersection of said identities. She, both in the collection and in the reading, 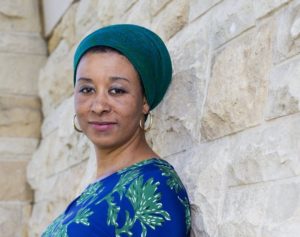 outlines the strange spaces she’s occupied as a result of being both African American and Muslim. (To hear more about this from the poet herself, check out her interview with The Kansas City Star.)

Sharif’s reading felt, at times, like a TED Talk; she showed family photographs and told childhood stories in between poems, making her story and consequent poetry feel all the more tangible. She sang a haunting song when she read a deeply emotional poem about a boy ripping off her hijab on the school bus, and I mean that literally—she sang the poem, and it was striking. That same evocative, lingering hum comes through in her work even without her singing it, though; there’s a profound sense of simultaneous pain and pride in Sharif’s reflections on her identity and, too, in the life-long pursuit, both in its wins and its loses, of that identity.

If I haven’t yet convinced you to pick up a copy of To Keep from Undressing maybe somebody else will. F. Douglas Brown, for one, writes that “Muslim narratives, bodies, and lineages don’t just matter; they make up the American fabric, both historic and contemporary, and woven within that fabric is a tradition rooted in the same ideals and morals and complications as all other American narratives. Sharif’s poems deconstruct the hijab not for metaphoric purposes, or to serve as a simplified how-to manual for the unlearned. The hijab becomes a directional marker into the poet herself, wondering ‘how to truly unwrap myself.’ And what we find is the good work of poetry: desire, regret, mis-spoken languages, vulnerabilities.” Scott Russell Sanders similarly states that “In nature, the greatest richness appears at the edges between habitat zones–between meadow and forest, oasis and desert, sea and shore. The same can be true of poetry that explores the edges between seemingly disparate realms or rival qualities, as in this fine collection by Aisha Sharif. She speaks in these poems of how it feels to be both Muslim and black, faithful and doubting, obedient and rebellious.”

Most importantly, Natasha Ria El-Scari writes, “To Keep from Undressing, Aisha Sharif’s timely debut collection, reveals the type of honesty that gets you uninvited to family reunions.” I urge you to read Sharif’s book. It’s an invaluable lesson in personal identity from which everyone, either regardless or because of their own identification, can benefit.