Community and Stories: My Week at the Juniper Summer Writing Institute

Four days into the week I spent at the Juniper Summer Writing Institute, novelist, essayist, and journalist, Okey Ndibe gave a reading—but it wasn’t the kind of reading I’d come to expect. Before he dove into an excerpt from his latest novel Foreign Gods, Inc., he just spoke. He wasn’t merely prefacing the work he was about to read; he was simply telling a story, talking to us, a crowd of adult writers and young writers gathered for a week of intensive reading, writing, and listening. His tone was conversational as he talked about the power of storytelling and community in his own life. It was as if he knew us, and we knew him on a personal level. He spoke of the conflict he faced, and which all writers eventually face, of wishing to experience the world while also needing the solitude to write about and make sense of it.

Ndibe’s conversation really summed up the essence of my seven days in Amherst, Massachusetts. Writers are constantly hammered with the mantra, “Write what you know,” yet seem doomed to live and work in isolation. And what can one really know locked in a room for hours a day? Juniper unlocked that room and challenged the notion of what it means to be a writer, stressing the importance of community that Ndibe addressed. Here were a few hundred individuals of all ages and backgrounds assembled at the University of Massachusetts, Amherst to improve their own writing and also experience the work of others. We had different goals, styles, and opinions, yet we shared the common bond of language. 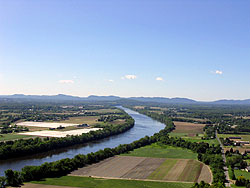 Even if we wanted to remain isolated, we were constantly with each other, attending community lunches, nightly readings, workshops, and open mics together. Most of us even lived in the same building that week, so even after all the daily activities had ended some of us still chatted and shared work. There was seldom a moment when writing wasn’t at the center of discussion, and it seemed as if we were constructing a little island for ourselves, a safe place where we could roam alone if we liked, but always made our way back to camp, ready to share a story or two with each other.

I got into a nice rhythm at Juniper. Every morning from 10:30 AM to noon there was either a Q&A session or craft session with the faculty and/or writers in residence. The craft sessions were lectures or group discussions, and we could attend the ones that interested us the most. I attended Yannick Murphy’s session on how to make fiction more engaging and energized. She spoke about the importance of challenging the reader and, as she put it, putting pressure on the page with strong images and a sense of discovery as the story unfolds. I also went to Lauren Foss Goodman’s craft session on how time works in fiction. Rather than lecture us, she had us break up into groups and discuss the several ways in which we’ve seen time used in a work of fiction. Then, in the spirit of community, we came together as a whole and compiled a large Google document with all of our ideas.

My final craft session was led by Brian Evenson, who was also my workshop instructor for the week. His session was called “Characters vs. People,” and explored character in fiction. On the page, a character is literally just a collection of words, yet we tend to feel connected to them as if they were real. Some stories feature nameless characters while others give a character symbolic significance through his/her name. Some writers give detailed physical and emotional descriptions of their characters whereas others leave it to the reader’s imagination. I found this craft session to be the most thought provoking, since my favorite stories usually focus on sympathetic and idiosyncratic characters who stay with me after the story ends.

Immediately after the craft sessions or Q&As we would all gather at the University Club for a community lunch before attending our workshops from 1:00-3:30 PM. Workshops were divided by genre and then instructor. Nonfiction, Poetry, and Fiction each had three separate workshops (nine in total) of about twelve people, plus the instructor. My fiction workshop, led by Brian Evenson, was revision-based rather than generative, meaning we all brought something we had been working on or tucked away for a while to re-examine. Before we shared our work, Evenson had us look at two versions of a Raymond Carver story and Welles Tower story. Both stories had undergone severe revision, either by an editor or the author, and it was liberating to see how even a strong story can still bend into something different, if not better.

Every night at 7:30 PM there was a reading by two or three of the writers in residence or a faculty member. I feel incredibly lucky to have heard James Tate read from his poetry collection, The Ghost Soldiers, on the first night. His reading was at once humorous and melancholy. Tate’s recent death is a loss for the entire literary community.

The readings were the highlight of the week. As if Joy Williams’ work isn’t spirited enough, hearing her read it herself was a hearty gut-punch. The cadence and rhythm with which Arisa White read her poetry was like hearing a piece of music, dynamic and resonant. Poet Zachary Schomburg and essayist Paul Lisicky inserted loads of humor into their readings, much of it unscripted.

And those unscripted moments were probably my favorite parts of Juniper as a whole. These were the moments that reminded me of our shared purpose in Amherst that week, our shared humanity, our shared conversation. The most important lesson from my week at the Juniper Summer Writing Institute was the reminder that writing is a conversation. It’s so much more than sitting alone with a pen, typewriter, or word processor. None of it happens in a vacuum.

Okey writes that “stories not only reinforce memory, they also cement communities—indeed make the very idea of community possible…the exchange of stories is, in itself, a supreme good.” Stories have the power to heal, provoke, and enlighten, and they define our humanity. Today, we don’t need to be face-to-face with the other party; we can share our stories all over the world online and in print, expanding the human dialogue. But actually being with so many other writers in the same place at the same time was a much-needed reminder that we’re all people trying to communicate through language. By the end of this intimate and intensive week, I felt like I’d known some of the people I met there for years.

The community fostered at Juniper reminded me of the one that Gandy Dancer has been cultivating for almost four years now, “connecting readers and writers since 2012.” I was fortunate to be surrounded by writers from all over the country for a week, hearing their stories and sharing my own, and we’re all fortunate to live in an age where the community built on stories and language can extend farther than ever before.

Comments Off on Community and Stories: My Week at the Juniper Summer Writing Institute