One day a few months ago, the inspiration to write hit me, and I went tearing around my room in search of my special gel pens. Once I had found one I got water, closed the door, opened the window, popped a piece of mint gum in my mouth, and curled up with a blanket and some paper. But instead of focusing on the poem I had been about to write, I began thinking about something else: our mental and physical writing spaces.

In 2015, Poets and Writers Magazine made a call for submissions: writers were to send in pictures and descriptions of their “writing spaces.”Some writers seem to favor doing work at their desks, while others sent pictures of their beds or porches. Novelist Sally Charette sent in a picture of a diner, a notably more public setting than in the other photographs. In her description, Charette describes what appeals to her about this particular writing space:

“A diner is a great place to eavesdrop and keep in touch with the natural cadences of conversation—and to pick up story ideas.”

But would a poet want to be in the same environment? What about a creative non-fiction writer?

Curious about what kind of physical and mental setting writers craved, I decided to ask other students here at Geneseo. Each individual has a different major (History/English/Communication), but each writes a lot both academically and for pleasure.

GB: In what setting do you typically prefer to write creative pieces?

Casey: “At my current place in life, wherever I can, like a study lounge or the campus library. Ideally a place that’s light, airy, and cozy. 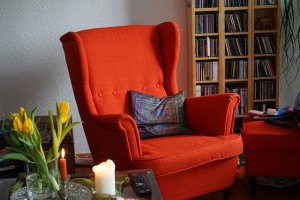 When I’m at home, then in my bedroom, to be alone. I shut the door depending on if people are making noise. But having an open door is especially nice if you’re home alone—then you have a connection to the rest of the house. But I mean, if I remembered to shut the door, I would.”

Chris: “I like to write outside a lot. If it’s raining, then in a coffee shop. Drinking coffee. I drink coffee 24/7.”

Leah: “The environment doesn’t matter so much to me… I’m good at working with noise. I work in the College Union all the time. Being in the right mental state is what’s most important to me. Like when all of my ideas start to come together, and then I just feel ready to write.”

GB: Do you play music when you write? If so, what kind?

Casey: “During busy-work I’ll play music. When I write creatively, it’s sometimes distracting, but sometimes not. Recently I’ve gotten into ragtime piano. I don’t know, I have a complicated relationship with music when I write. I prefer no vocals, or very familiar vocals as to not get un-focused.”

Chris: “My music varies. It doesn’t really matter what’s playing, I use it mostly to get relaxed and in the zone.”

Leah: “It depends. Usually I listen to music with the type of mood that I want to translate into the story that I’m writing. I listen to a lot of piano. I listen to music in different languages too… often I pick unfamiliar music in general so that I won’t be able to distract myself by singing along.”

GB: Are there specific foods/beverages that you consume when you write?

Casey: “Chocolate. Water. Fruit, if it’s in the morning. Nothing that distracts me too much, or I’d say Nutella.”

Leah: “Water. I also chew gum a lot, because it’s calming for me.”

GB: Are there other little habits/preferences you have to help immerse yourself in writing?

Casey: “If there’s a deadline, then usually I’m writing with good posture and in a cute outfit so I’ll feel good about myself. If it’s spontaneous writing, then usually I do it in my PJs at night. Unless I’m writing poetry late at night because it’s the type of night where everything’s fucked up, in which case I’ll fall asleep in my clothes. Other preferences… well, I always hand-write with a 0.7mm or 0.9mm mechanical pencil, or well-sharpened Ticonderoga pencil.”

Chris: “I really like to write near big, old buildings. Like I write outside of Sturges a lot, which is as close as I can get to that while I’m on-campus. Like old, tall, majestic architecture.”

GB: What do you consider distractions to your writing?

Casey: “My state of mind. Stress and worry. Also personal biological and neurological cycles probably factor in to when I want to write: like I have naturally productive and creative times. Another distraction is having someone in the room with whom I have a complicated relationship. Or having people wandering around talking– especially if they’re saying upsetting things or being obnoxious. Also people talking to me because I’ll want to give them full attention. Physical discomfort, too: like if my back hurts or I’m hungry. Or if I’m in public and feeling self-conscious.”

Chris: “People are distractions, I would say. Only if they interact with me, though, I don’t mind a bit of chatter as long as it’s not directed at me.”

Leah: “Friends are distracting, unless they’re someone that  I can discuss my story with. If I have class assignments that I know that I haven’t done, that’s distracting, too.”

GB: Anything else to note about your ideal mental and physical “writing space?”

Casey: “I’d like it to be clean and organized, to feel safe, to know where everything is, to know what’s going on, and not have other things going on around me. But I can be comfortable in a lot of places as long as they’re calm and quiet. I really like places that are sunny, light, and airy. I’d want access to everything I need, like a ‘base of operations’– one day maybe I could have a loft in my future home.”

Leah: “Like I said, I’m good with almost anywhere! I just don’t write in my room because then I just end up distracting myself too much.”

GB: Is there a significant difference in the environment you prefer for academic writing?

Casey: “As an English major, oftentimes the boundary is blurred. I often end up doing academic work on the fly. For that I prefer more intense or extreme-focus atmospheres like study lounges or the quiet section of the library. In general, I prefer a more relaxed atmosphere for creative writing.”

Chris: “The physical settings are pretty similar, but when I write for classes I tend to listen to less music so that I can focus hard. Especially when I’m just beginning an assignment and need to get the ideas out and structures.”

Leah: “I tend to listen to listen to music in languages that I don’t understand so that I can focus on my work instead of on the lyrics. I tend to always do academic work out where there are a lot of people around to try and stay motivated.”

I went into the interviews unsure of what to expect, and came out having discovered two things. One, writers can be very flexible about some things when it comes to their “writing space,” but are often very specific and picky about a handful of others. Two, preferences seem to vary greatly: for an example, Casey was all too happy to write in her room, while Leah said that she consistently avoided doing so. Chris favored writing outside a lot, while the other two leaned towards working inside.

The “writing space” is a special setting whether you’re an essayist, a novelist, or a poet. In order to become completely absorbed in their work, many writers set themselves up in personally specific atmospheres, perhaps so that mental/physical discomfort doesn’t poke through into the creative space.

Next time you’re writing, consider: what do you do to immerse yourself?

Comments Off on Finding Your Mental and Physical Writing Space