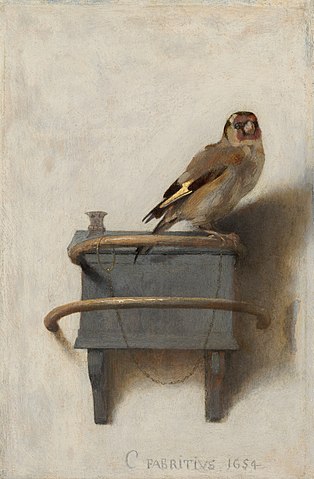 The Goldfinch book and film both tell the compelling story of young Theodore Decker, whose life is thrown into turmoil when his mother is killed in an explosion at an art gallery in New York City. Upon surviving the explosion, he finds Carel Fabritius’ famed picture, “The Goldfinch,” and takes it with him throughout his life, from his rich friend’s house in New York, to his addictive life on the outskirts of Las Vegas.  Both versions of the story end on extremely interesting, emotional notes. However, whereas the movie held my attention until the end credits started rolling, the book completely lost me at that crucial end point. After Boris’ uplifting speech about bad deeds yielding good rewards, after that priceless painting and many others are saved, Theo travels the world buying back the fake authentic furniture he sold, in an attempt to right his wrongs. However, the optimism the reader feels completely gets lost in this last scene, with Theo speaking directly to readers he assumes he will never really have, and giving a pages-long rant about how cruel and meaningless the world really is that can only be described as Patrick Bateman-esque (for those who don’t know, the jaded, unreliable main character of American Psycho). Meanwhile, the movie chooses to omit the insane rambling, and instead focus on that idea that good can come from bad. Coupled with some gorgeous shots of Boris and Theo crying together, of Theo apologizing to Hobie, and of Theo going antique shopping with Mrs. Barbour, director John Crowley makes Theo appear more human and connected by the end of his story. Crowley gives him character development, which, interestingly enough, the highly-praised Donna Tartt does not. Within the pages of her book, Theodore Decker both starts and ends his journey as a jaded, depressed, mentally ill character. In Crowley’s version, he is able to find some semblance of happiness, family and love within the people around him.

Based on what I’d heard about Donna Tartt’s writing–and about John Crowley’s directing–I wasn’t incredibly surprised at how much praise the book got, versus how much criticism the film got. However, after actually watching and reading them, I could not understand it. My expectations for Crowley’s film were very low, and I loved it; my expectations for Tartt’s book were incredibly high, and yet it left me feeling frustrated at the end.

My verdict: If you’re one of those people who grumbles that “stories don’t always have a happy ending”–if you’re more like the cynical Theo Decker–chances are, you’ll enjoy the book over the movie. But if you appreciate an optimistic, hopeful ending to a tale, like Theo’s best friend Boris, the movie may be more appealing to you.