I don’t know about you all out there, but the art of performance has always struck me as being connected in some strange way to the literature we read. I think this correlation exists in my mind not because of something cut and dry that both the forms share (e.g. convention, narrative structure, whatever), but because of the eventual impact these forms have on one’s perception. I often find myself at the end of a great performance getting that same exact inward glow of profundity that one receives finishing a great book. Like suddenly the thin layer of snow plastered onto the side of your car window you couldn’t scrape off from earlier has flung off in-passage, and driving now you can see the glory of what’s in front of you in its entirety.

Perhaps it’s a stretch to compare the afterglow of a performance to driving visibility, but I can’t be the only one who has felt this feeling and marveled at it at some point or another. Here… try this if you think I’m exaggerating: Think to the last time you went to a performance- whether it was a play or a concert or music event- and recall that exact moment you stepped out of the venue. That’s when I’ve noticed the sensation is at its strongest. Feel the cool air of the evening brush against you (your lungs sigh in relief at the prospect of breathing in air that hasn’t already been breathed out by dozens of others); notice the muffled chatter of strangers around you (talking about what transpired inside no doubt); and scan the just-beginning-to-fill street in front of you. You’ll realize then that nothing really even looks like how it once did. That’s the feeling. However long you were in that building witnessing that particular performance, you became separated from yourself. Nothing (if the performance did what it was supposed to do) existed beyond the present moment of spectatorship, and in coming back down to reality your brain got tripped up in transition. Surroundings are new and profound and filled-to-the-brim with meaning, and what you soaked up indoors superimposes itself outdoors onto the very fabric of your personal being. I see this exact moment in time as the true power of performance, because without doing anything but buying a ticket, you alter your consciousness in significant ways.

So when I heard that SUNY Geneseo was hosting a Hip Hop Symposium, and one that featured live performances of various kinds, it only felt appropriate to go and see how the events would shake up my POV as well as others around me. I brought a camera along to take pictures and record some video and audio. 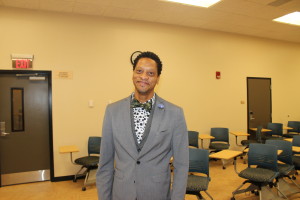 Some background on the Symposium:

For the past five years during the spring, SUNY Geneseo has put on a Hip Hop Symposium: an event “dedicated to celebrating the hip-hop movement and opening conversations about its presence in the world and people’s lives.” Various groups and individuals from all over the country come in to speak during the week on hip-hop and topics related; with some even coming to perform. This year’s Symposium, subtitled “The Revolutionary Age”, featured three events: Shaun Dunwoody, a Rochester-based Artist and Community Arts Organizer, gave a lecture on graffiti as an art form. Elizabeth Acevedo, a spoken word poet from NYC, performed a spoken word set in the Knight Spot. And finally SASI, Geneseo’s social justice group, organized a dinner & show event called Express Ya’Self- where students were able to perform their own works in front of an audience. 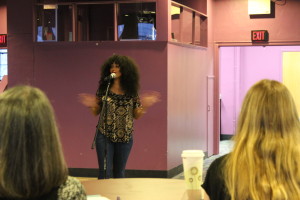 Elizabeth Acevedo, Poet and Spoken Word Performer (listen to a clip of her performance here)

So what can I say about the Hip Hop Symposium as a whole? Definitely attend next year if you haven’t before. There are some really awesome guests that come through, and the performances that take place leave you with something to mull over. I was definitely left with the “performance afterglow” feeling as an audience member, but the nature of it caught me by surprise. I think the surprise in part had to do with the Symposium’s numerous parallels to two very recent events that still reverberate through the nation’s consciousness.

Some background on the past couple of months in the entertainment realm:

Beyoncé Knowles and Kendrick Lamar individually give live performances of some of their newer material on two separate national television spots. This type of thing would go relatively under-the-radar in normal circumstances, except two things occur in both that make the performances legendary. The first is that they occurred, respectively, during the Superbowl and Grammys. These are among the most watched television events each year they air, and also the most historically safe, white, and easy going content-wise. The other element is that these performances were unabashedly about what hip-hop has always encompassed: race. Take a look at some of the lyrics to the songs performed on mainstream television by Lamar and Beyoncé:

I’m black as the moon, heritage of a small village

Came from the bottom of mankind

My hair is nappy, my dick is big, my nose is round and wide

You mix that negro with that Creole make a Texas bama

I like my baby heir with baby hair and afros

I like my negro nose with Jackson Five nostrils 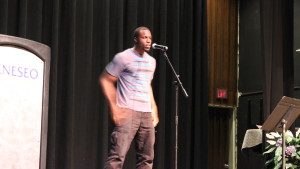 No doubt the sheer honesty of these lyrics made some very uneasy. After all, who was expecting a conversation about race to come out of what are supposed to be fun little TV events?

But the truth is these two performances have completely redefined what is expected (and possible) out of live hip hop performances. I can’t stress enough the sheer importance and artistic prowess of these performances (especially Kendrick’s), so I encourage you guys to watch these if you’ve got the time. Words don’t really do it justice.

So back to the real point here: how does Geneseo and the Hip Hop Symposium tie into the presence of these revolutionary performances? Whether or not we realize it or not, we too are contributing in our own ways at Geneseo to the conversation happening nationwide on race and what it means to be a person of color in this country. We, like superstars of the music industry, are using the stage to push ideas that may be uncomfortable to most- but unfortunately relatable to many. There’s been no shortage of racial tension and injustice in this country over the past couple of years, and recent music and performance reflect this. As Leo Tolstoy once said, “Art is not a handicraft, it the transmission of feeling the artist has experienced.” People around us are hurting and angry, and the stage time and time again is where all of this manifests itself. We can look to the big names like Beyoncé and Lamar, or to those who took part in this year’s Symposium for proof; performance is not just about entertainment anymore, but about a message.