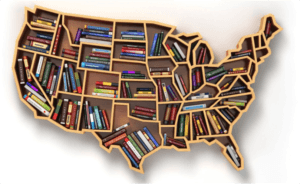 This year, SUNY Geneseo hosted a meet-the-author lecture featuring Icelandic-born novelist Ófeigur Sigurðsson. Also in attendance was SUNY Geneseo’s own Dr. Lytton Smith, who worked as a translator for Sigurðsson’s most recent publication, Oraefi: The Wasteland. Over the course of the evening, the two discussed the writing process, the translation process, and the life experiences that influenced the book.

Yet, what stands out in my memory is not Sigurðsson’s humorous comment about casting sheep (yes, the animal) as fictional characters; nor is it his serious comment about climate change’s threat to transform Iceland into a volcanic “inferno.” No—even the latter statement was arguably less jarring than one simple statistic the author shared regarding America’s own threatening environment: that only three percent of the books marketed in the United States are translated texts.

When considering how many different nations, peoples, languages, and cultures exist around the world, it is shocking to imagine that such a small fraction of the literature readily available for American consumption has been written outside the U.S. in a language other than English. This fact is alarming for multiple reasons. The human learning process occurs when information and ideas are communicated freely. But in such a homogenized literary realm as ours, where conversation rarely leaves the borders of one’s own nation, knowledge and education are inhibited. By turning a blind eye and deaf ear to the rest of the world, the United States finds itself entering a self-imposed isolation from global struggles, ideas, voices, ways of life, and realities.

While such a lack of literary diversity is concerning in and of itself, perhaps the most concerning part is our lack of awareness regarding it. After all, it is easy to ignore the extent to which the monopolized state of the publishing industry has limited the American public’s reading options and, consequently, our connection to the rest of the world.

Ultimately, there’s nothing quite as scary as the unknown. And yet, that’s exactly where the paradox lies; for one of the best ways to make the unknown known is through literature. Books bridge worlds, and conversation connects culture gaps. That’s why the homogeneity of America’s literature is so scary. Without access to outside viewpoints, without the ability to glimpse into the culture, literature, and art of the rest of the world, countries become sheltered, apathetic, ethnocentric places. As such, it is Gandy Dancer’s goal to push American readers outside not only their individual comfort zones, but the “comfort zone” into which the entire American literary realm has lapsed.

In order to combat the statistic, the University of Rochester launched a platform to help publicize international literature: Three Percent. According to the organization’s website, “[T]hat 3% figure includes all books in translation—in terms of literary fiction and poetry, the number is actually closer to 0.7%.” Moreover, “An even greater shame is that only a fraction of the titles that do make their way into English are covered by the mainstream media.” During his lecture, Ófeigur Sigurðsson posed the idea that the best way to introduce Americans to international literature is, if not through mainstream marketing, then by holding in-person events like the meet-the-author series he attends.

From our own little corner of the literary universe, Gandy Dancer is working to promote international literature by encouraging writers to submit works in any and all languages. In the past, Gandy Dancer has featured a poem translated from German to English, with the two languages appearing side by side. In a continuation of that trend, the upcoming 7.1 issue will feature an interview with Ófeigur Sigurðsson, who, in addition to writing, works as a translator himself. Be sure to check it out!

Comments Off on Lost in Translation: Confronting America’s Apprehension Toward International Literature