An Observation of the Film Industry’s Current Literary Mentality

I have never considered myself to be someone who only reads a novel because it will be adapted into a film. However, last spring, when the trailer for The Fault in Our Stars, based on John Green’s YA bestseller was released, I found myself rushing out to my favorite Barnes & Noble to grab a copy off the shelf. Afterwards, I spent the majority of my traveling on spring break, obsessed with devouring the love story of two cancer-stricken teens before the film was released in June. Several friends of mine had already recommended the book to me as a must-read when it was published in 2012, but it wasn’t until I saw the trailer when I felt a sudden urge to get my hands on a copy. This notion made me begin to question my incentive for reading the book in the first place.  Questioning my motivations led me to examine the film industry’s popular paradigm of adapting literary works into movies. 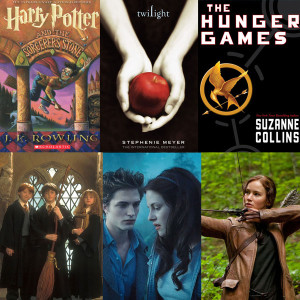 Harry Potter, The Hunger Games, and Twilight. Those are just a few YA bestsellers that have since been turned into big-budget blockbuster hits. In fact, just this year, Veronica Roth’s dystopian trilogy, Divergent has joined the ranks, and Rainbow Rowell’s realistic 80s teen romance, Eleanor & Park has been confirmed for film adaptations later this year. Even works of fiction and nonfiction are privy to this current industry mentality. Just this fall, Gillian Flynn’s dark thriller, Gone Girl was released as a major feature film along with Jonathan Tropper’s dysfunctional family drama, This Is Where I Leave You. I’ll also never forget Emile Hirsch’s stoic portrayal of Christopher McCandless’s brave voyage into the Alaskan wilderness in Into the Wild, based on the national nonfiction bestseller by Jon Krakauer.

I have to admit that there is an inherent pleasure attached to literary adaptations. I love seeing characters I have come to love and elements of the novel I have envisioned come to life through a visual medium. In addition, many films that use novels or memoirs as source material draw attention to authors and provide them with a platform to promote and publicize their work to a wider audience. In fact, I would even argue that these film adaptations often encourage others to read by giving them a motivation that didn’t previously exist.

Currently, I’m reading the nonfiction masterpiece, Wild, the inspiring true story of Cheryl Strayed’s journey to self-discovery that has since been turned into a film starring Reese Witherspoon as Strayed. I don’t know what your plans are for December 5, but as for me, I’ll be sitting in a comfy dark theatre with popcorn in my lap, watching Strayed’s journey come to life on-screen. Maybe one day I’ll even read about the work of a former Gandy Dancer contributor being adapted for the cinema—the literary world is full of possibilities.