The War on Math

It’s a statement we’ve all probably heard, if not spoken, multiple times throughout our lives. The sentiment seems ubiquitous among literary types like me. Why is that?

Numerous sources claim that the idea of some people being more inclined to natural mathematical talent than others is a lie and anyone can be a math person if he would just quit whining and put some effort into his studies already. I’m far from an expert on the workings of the human brain, so I’m in no position to contest that, but I can say that in my personal experience, when I’ve said that I wasn’t a math person, I haven’t merely been stating that I found math harder than other academic subjects (though I certainly do); I’ve also been expressing that I just plain don’t like math. 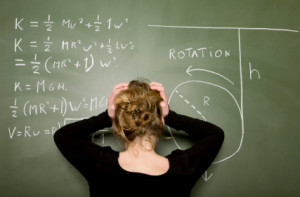 I guess that’s not entirely true; I do enjoy math in some capacities. I’m a big fan of Sudoku and those logic puzzles where you have to figure out who drives which car or who saw which movie. Even the less glamorous parts of math, the geometry and trigonometry and calculus, aren’t the absolute worst things in the world. (Algebra is pretty bad, though. Algebra can die in a fiery pit.) I suppose I’d rather find a derivative than clean my room. Rationally speaking, I know I shouldn’t have that much of a problem (if you’ll excuse the pun) with math, so why do I often feel the need to tell people those dreaded five words: “I’m not a math person”?

I suppose my beef with math lies in the sense of obligation that comes with it. Everywhere we look, there are constant reminders that being bad at math equals being bad at life. This is especially true for students. Announcing that one is majoring in anything other than a STEM field requires bracing oneself for an onslaught of jokes about never finding a successful career after graduation, and contrary to what the wannabe comedians in our lives may believe, telling us to practice the phrase “Would you like fries with that?” is not funny.

I don’t think math would leave such a sour taste in my mouth if the study of English received the same treatment. Good linguistic skills are a necessity for most every career path. After all, how can one attain a respectable position without the ability to write a proper cover letter? How can one come across as intelligent and educated in a job interview without knowing how to speak eloquently? A strong command of the English language is just as applicable in everyday life as math is, if not even more so, but I have never heard of anyone feeling pressured to admit that they’re ‘not an language person,’ even though many people certainly don’t seem to be language people.

Anyone who regularly logs onto any form of social media can attest to the fact that a large chunk of the English-speaking world has no understanding of the difference between ‘your’ and ‘you’re, ‘to,’ ‘too,’ and ‘two,’ or ‘there,’ ‘their,’ and ‘they’re.’ Plenty of the people who make these errors are otherwise perfectly intelligent; they fail to appreciate the importance of a properly used comma not out of laziness or stupidity, but because society has not drilled it into them that it’s something they need to know. Sure, we all learned how to underline the verb in a sentence in elementary school, but after sixth grade or so, teachers tend to falsely assume that everyone already knows proper grammar and stop teaching it, clearing up class hours for what is viewed as more important content, ie., math and science. As a result of this, when an adult is incapable of using an apostrophe properly, she is not typically viewed as a complete failure. Perhaps we have a society have become desensitized to poor grammar.

Those who don’t identify as math people, on the other hand, are mercilessly chided for being lazy. Googling the phrase “not a math person” yields pages upon pages of results exhibiting this phenomenon. This, combined with the aforementioned cheeky comments about being unemployable, comes across as a form of bullying. So what if some of us prefer the humanities over math? Some of us prefer chocolate ice cream over vanilla, but we don’t typically see supporters of one flavor attacking those who favor the other. Preferences in academia should be no different.

I recognize that the field of mathematics is important in many facets of my everyday life. I also expect fans of math to recognize that the field of English is important in many facets of their everyday lives. But just as there’s no need for them to spend hours critically analyzing Hamlet, there’s no need for me to spend hours finding the value of x. Let’s just agree to enjoy what we enjoy and not think less of others for enjoying different things, okay?

Comments Off on The War on Math