Writing Advice from Idra Novey, Author of Ways to Disappear and Exit, Civilian 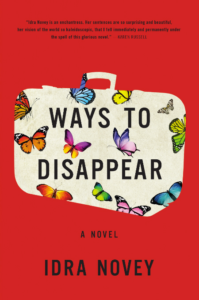 Posted by Kallie Swyer, GD Poetry Editor for 5.2, Former Contributor for 4.1 and 5.1

As a part of the Geneseo Literary Forum, translator, novelist, and poet Idra Novey came to our campus to discuss her books with in-class visits and a reading. I was lucky enough to be in one of the classes that she visited, where we got to discuss her latest novel Ways to Disappear,  and her recent poetry collection Exit, Civilian.

Ways to Disappear is a story about a translator whose author disappears under mysterious circumstances. The novel teases magical realism in the interactions between the characters and their surroundings while portraying the translator’s journey toward finding her own writing.  After reading this novel for class, we had a lot of questions about this book, such as, why magical realism?  Novey described her style as “slippery realism,” noting that her story dipped into the realm of magical realism, but never stayed there long. “It’s nice when magical things happen,” she said, “it keeps people surprised.”  This came through in the radio broadcasts that she included between chapters; Novey said she imagined these as a sort of Greek chorus, and they infused the novel with an added layer of magic.

Aside from questions about the novel itself, a lot of the things that we asked Novey were about her writing process. Novey told us of her ideal schedule: waking up well rested after a night of reading, and spending hours writing without using the Internet. However, she said, what is ideal isn’t always typical, and Novey noted that life often got in the way of her writing.  As writers, we’re always interested in learning about how others go about getting their thoughts down, and are curious to hear if established writers have the same problems that we do – that is, the problem of being unable to stick with a consistent writing plan – so hearing Novey talk about this was reassuring, to say the least.

I’m currently in my last semester as a creative writing major, and will soon be out in the world trying to make a career out of writing, so I’ve been grappling with worries about how to enjoy writing when it’s something I’ll be using to pay my bills. Novey offered advice to this, saying that the most valuable thing you can do is to, “Stay with the joy of writing as much as you can.” She suggested finding one or two books and keeping them close like a talisman, books to which you can return to find inspiration whenever you need it.

Lastly, we spoke about what she was currently reading, and asked for book recommendations: the two books that she mentioned were Self Portrait in Green by Maria NDiaye, as well as a post-Brexit novel Autumn by Scottish author Ali Smith.

Comments Off on Writing Advice from Idra Novey, Author of Ways to Disappear and Exit, Civilian