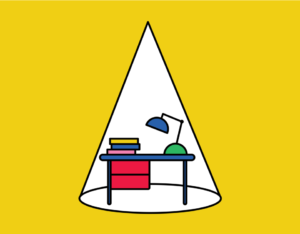 A quick glance at where former Gandy Dancer contributors are now is all that is necessary to confirm that the literary journal acts as a spring board which propels emerging writers into the writing trajectory Poet Yael Massen, who just finished her MFA at Indiana University is currently working on a poetry manuscript, which she says is “emotionally exhausting.” Her poems can be found in Gandy Dancer’s inaugural issue. Since, she has been published in several literary journals including Columbia Journal, Tupelo Quarterly, Southern Indiana Review, The Journal, and has a couple of poems forthcoming in print issues of Colorado Review and Fifth Wednesday Journal. She has also begun working on contemporary Hebrew poem translations—two of which have been published in Waxwing.

She acknowledges that part of the reason Gandy Dancer thrives is because of the “energy and excitement of a student-centered learning environment.” These days she spends her weekend mornings in coffee shops with a soy latte, legal pad, a laptop, and “the expectation that [she] might produce a poem, and at the very least…continue to activate neural connections used in the process of forming creative work.” Other former contributors to Gandy Dancer are continuing to write—though their work is more scholarly than literary academic. Suraj Uttamchandani, a founding editor of Gandy Dancer and a fiction contributor for Gandy Dancer 2.2, says that though he is engaging in more academic writing now, his training with Gandy helped him and continues to help him hone his writing. In regard to where Gandy is now, he is “delighted to see it blossom into something so sustainable and valued.”

Dante Di Stefano, a contributor to Gandy Dancer’s issue 3.2 and the postscript of issue 4.2, has not only published his first book of poetry (Love is Stone Endlessly in Flight) but has been published in many journals including Arts & Letters, New Orleans Review, The Saranac Review, and Sierra Nevada Review. He also writes monthly book reviews and conducts interviews for The Best American Poetry Blog. He is currently working on an anthology out in early 2018 called Misrepresented People: Poetic Responses to Trump’s America (NYQ Books). Lately, he says he is constantly writing to his “unborn daughter and pregnant wife.” He has worked as a high school English teacher in Endicott, NY for the past ten years. Simultaneously, he adjuncts as a creative writing professor at Binghamton University (where he received his PhD in 2015). His “writing life and work life have become inextricably linked in a way that [he] initially resisted, but now fully embraces.”

Gandy Dancer holds “specific significance” for Di Stefano because it “has played an important role in [his] life personally and professionally…it’s always beneficial to have work sanctioned by the staff of a literary journal.” He goes on to highlight the importance of having other people deem your writing meaningful and that “it means more to [him] to be published in Gandy Dancer than to be published in bigger national journals.” As Massen recognizes, it is especially important for writers to be recognized early on in their careers.

Lucia LoTempio, whose work you can find in issue 2.1 and (can you link to the book review in 3.1?) 3.1, has just finished her poetry manuscript at the University of Pittsburgh where she is in her final year as an MFA candidate and poetry writing instructor. Some of her favorite publications thus far are the Visible Poetry Project, where she was paired with Neo Sora who made a film inspired by and featuring her poem; Nomadic Ground which distributed her poem in bags of coffee, and LEVELER, which publishing her poem alongside an editor’s analysis. She has also been published in The Journal, Linebreak, and NightBlock—all literary journals she “began to admire during [her] time at Geneseo.”  She remembers when she received the acceptance letter from Gandy Dancer.  as She received the email at the campus Starbucks and and “immediately got in line for a slice of banana coffee cake to celebrate.” Lucia went on to be a managing editor of Gandy Dancer, and she acknowledges both the importance of participating in conversation with your contemporaries and “giving readers a platform for new conversations.”

As Margaret C. Anderson, editor of The Little Review, put it: a journal should publish “the best conversation the world has to offer.” As a literary journal which is often the first opportunity for writers to be published, it’s rewarding for us to see these writers continuing their craft!

Comments Off on Former Contributors: What They’re Doing Now