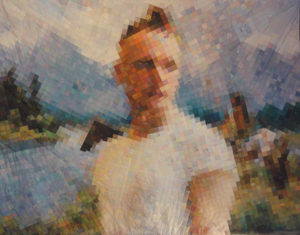 This fall I had the pleasure of visiting the annual Visual Studies Workshop Pub Fair and Litsplosion event in Rochester, NY.  I was immediately entranced by the work of Greg Climer, whose art is featured on the cover of ImageOutWrite’s most recent issue.  He uses different textile media, specifically quilts and knitted fabrics, to embody portraits and even to create animations.  The above image, titled “Portrait of Timo” after the subject, seems both serene and contemplative, both dreamy and tactile.  Similarly, the issues of ImageOutWrite, which I picked up contained pieces whose subject matter seemed both close to home and just out of reach.  ImageOutWrite publishes the works of LGBT+ writers, many of whom are established and lauded writers.  In short, ImageOutWrite collects the best LGBT+ writing all in one place.

For the purposes of this review, and also just because, I grabbed both the most recent volume (Volume Five) and the very first volume.  The first volume, published in 2012, was an absolute treasure.  I ripped through it, savoring the ethereal quality of Damian Serbu’s “Lake Michigan’s Calling,” a story about a college student who forms a relationship with a boy who lives in the water of a lake. I so admired Jes Gonzalez’s poem “Queer Theory” that felt the urge to tack it to my wall as a reminder of the power of unabashed queerness.  It reads “because i wear cockrings on my wrists / because i fuck with my fists / because it’s worth the risk / to feel freely expressed,” and as the speaker grows more and more emboldened, I feel my own shoulders set and my back straighten.  Why can’t we all be as confidently queer as this speaker?  Why can’t I?

Near the volume’s end, Jon McDonald’s “Cry of the Wolf” presses through the crowd and breaks you wide open.  It tells the story of Warin and his lover Sevaric, their historic tryst in 14th century Rhineland, and the dark secrecy of homosexuality in a world it is difficult to think about.  The story is told in the form of a translated journal, and McDonald’s storytelling prowess makes me feel as if I am transported to the time of these two fated lovers.

The fifth volume is larger than the first, which feels like a celebration in itself.  The voices in the fifth volume are more diverse, quite possibly due to the sheer number of authors included.  It feels like the magazine has found its ideal presentation. The cover is polished, the layout of the stories is physically more expansive, allowing the words to take over the page instead of crowding them together.

Jeff Mann’s “The Blackberries of No Man’s Land” is a poem recounting the feelings of a Confederate soldier as he watches a Union soldier eat blackberries, imagining a life where they don’t have to fight each other, where they could instead share a life together.  The poem is both macabre and tender, and the poem feels like a welcome reprieve for both the speaker and the reader: “There’s / that Yank again, the big blond boy / I faced down on picket, berry juice / smearing his bearded cheek like / a Bowie-knife slash. He grins.”  I can imagine the swipe of the juice, the gory image it must create, but I can also imagine the endearing grin on the soldier’s face as he hands the Confederate soldier a handful of berries.  The poem is heartbreaking in its contrast, a fleeting image.

Alex Sanchez’s “Superman vs. Wonder Woman” tells the story of a transitioning parent, her family, and the growth of the bond between herself and her son, the narrator.  The story is contemporary and it inhabits the mind of a teenager learning a potentially shocking secret about someone they thought they knew, and then coming to know someone they’ve always known in a new way.  As a piece of short fiction, it tells a much larger story than what is physically on the pages, and I found the story about Pandora’s transition to be poignant and humbling.

My favorite piece in this issue is “Fireworks on the Fourth” by Richard Natale.  It recounts the unlikely coming together of three ex-lovers after the death of their shared boyfriend, who suffered and ultimately succumbed to AIDS.  The gay men the story follows are witty, sharp, and an absolute hoot.  They’re an altogether crasser version of the Golden Girls, and by the end, I felt like I was mourning the death of Paolo along with Dewey, Calvin, and Patrick.  The story is honest in a way that is hard to achieve, and it manages to keep you constantly on your toes.  It represents a narrative that isn’t common in everyday discussions of homosexuality, and I feel that it illuminates an often marginalized group within a larger marginalized group.

On the whole, I feel like ImageOutWrite does an amazing job of gathering voices from the LGBT+ community and compiling them into a cohesive reading experience, and I would definitely watch out for their upcoming issues!