On the Influence of the Internet

There’s a website that has a URL with sixty ones in it. Not the phrase “sixty ones.” The number one sixty times. Upon arriving at 111111111111111111111111111111111111111111111111111111111111.com, you’ll be asked to “go to Rupert Murdoch’s Myspace page to be my friend.” The entire website is just one page, as far as I can tell. One page plastered with Arnold Schwarzenegger’s face superimposed onto the bodies of what I think are Sailor Moon characters and phrases in both English and Korean. If you take the time to hover around the website you’ll find a few other treats, like .gifs of ‘90s Arnold and other Korean and English phrases like HOLY PLASTIC BEEFY, which flash onscreen when you mouse over certain sections of the page. The best part about this page, in my opinion, is that this whole display that I just described takes up about three-eighths of the browser. 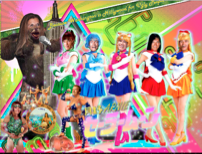 I grew up in a millennium where I could learn almost anything in almost no time at all. Where I was surrounded almost constantly by a hopeless oversaturation of opinion. Where art in the digital medium began to thrive.

Windows ’95 was ancient by the time my parents set up a fat, tan hunk of wires with the operating system installed on it so that my sister and I could play computer games in the guest room. The thing didn’t even have internet access. My parents knew where that might end up. I would have to wait years before I was finally granted unlimited access to unlimited potential. But even though I was only allowed to play Pajama Sam for an hour each day, I was hooked.

Over 74 million websites were hosted through WordPress alone, as of February 2014.

The internet has changed the way that literature is published. Print mediums no longer hold a monopoly on content and publishing companies don’t hold all the power. The global distribution of ideas is now well within the skill-set of an elementary school student.

Actually, it would be misleading to say that publishing companies and print magazines ever held ALL the power. For over a hundred years now, smaller magazines and journals have been printing obscure pieces and rising stars. In fact, the first literary journals like Poetry served as vessels for the modernist poetry movement and published authors who would go on to change poetry, like T.S. Eliot and William Carlos Williams.

But more recently that role in promoting experimental works has been adopted by publications with a primarily online presence, like [PANK], which publishes experimental content online every two months but in print only every two years. There are significant reductions in cost for an online publication over a long period of time. They only need to pay for website maintenance in order to create a magazine, where a print version would incur significantly larger printing costs for each issue. It’s possible that some publishers who want to showcase newer, more uncertain material (as Harriet Munroe did with Poetry) would prefer an online format, which eliminates the high costs of printing and distributing.

The internet has changed what is published as well. It provides a focal point for a confluence of all these different waves of artistic style. Online artists have the option to utilize text, audio, image, video, unique web formatting, and any combination of those tools in order to create. Where print publications are limited to text and image, online journals like Wag’s Revue can publish artwork that comes in .gif form and journals like Awkword Paper Cut can publish video poems that are more like short films than they are works of literature, although they contain elements of both.

The challenge then is to get people to your website. While there are specific real-world displays of publications for sale, some online journals can get swept into a fold of cyberspace and be lost forever. There are also some problems with the democratization of content on certain sites. Reddit, for example, is a content-sharing website where users vote on their favorite posts, which are then most-prominently featured. People can take advantage of this and post things that cater to the users in order to get on the “front page of the internet,” and you could make the argument that this does in some cases prevent good information from getting displayed there.

Comments Off on On the Influence of the Internet