Our Responsibility As Writers Under Trump 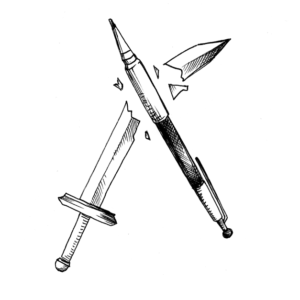 “In the dark times, will there also be singing?

Yes, there will be singing.

About the dark times.”

Do you remember when you were younger, learning history in school and thinking, “If I was alive then, I would have…”

You’re alive now. What you’re doing now is what you would have done then. Donald Trump was inaugurated into office a little over a month ago, and already the arts are in danger.

If all goes according to his plan, the funding for both the National Endowment for the Arts and the National Endowment for the Humanities and the Corporation for Public Broadcasting will be cut completely. These agencies are given a mere $148 million a year—which sounds like a lot more than it is. Combined this is $741 million, which is less than one-tenth, of just one percent of the United States’ annual federal spending.

Less than a tenth of our federal spending is put towards the arts.

Less than a tenth of our federal spending is used to promote the arts in public schools and colleges across the nation. This small fraction funds research and gives access to cultural and educational reserves in the arts across all fifty states. This small fraction is at risk of being cut completely.

But why should I care?

Writers yearn to deliver the truest version of whatever tale we’re attempting to tell. But it’s hard. Sending your thoughts out into the abyss is one of the most nerve-wracking things a person could do. Add in an oppressive ruler for good measure and if you stir the pot the wrong way you may receive an angry tweet denouncing you for it. Sad!

There are threats today that most Americans haven’t had to consider as realistic risks in recent years. Just like the possibility of cutting funding for our arts, many other unfavorable alterations are possibly being queued up for implementation. These are uncertain times we live in, and it’s likely to be this way for quite some time.

Still, we can’t numb ourselves to this. We can’t lounge in our front row seats to this show of destruction. As writers, we can’t allow ourselves to drop our pen and paper while this is all happening and stand to the side. We owe it to ourselves as lovers of the written word and people of profound passion to write the unabridged truth. Not the “fake news” or “alternative facts” but what the people are feeling. Writing is an art that can cure qualms of all kinds, soothe anxious souls, and bring hope to those shadowed by fear. Be it an audience of one, or an audience of one hundred—thoughts and ideas are powerful enough to bring the change needed for us to become better. And we need to become better.

While the possibility of funding cuts looms, the downpour hasn’t started just yet. We have to remain compassionate and courageous in our words. Those in power are scared of the impact our art has. Let this inspire us to create art more fiercely than ever before.

It’s a tough job, being a writer during these dark times. It’s worrisome when you want to contribute, but aren’t sure if you will be able to handle the responsibility of writing something that truly matters. Still it’s important to write anyways. It’s important to be inspired by the state of the world. We have to let it fuel us. It’s more important now than ever before to keep creating whatever it is that matters the most to you.

I’ve found that life under our new president provides abundant inspiration. I want to at least try to bring comfort or visibility for those who otherwise wouldn’t feel seen or heard in these dark times.

Comments Off on Our Responsibility As Writers Under Trump