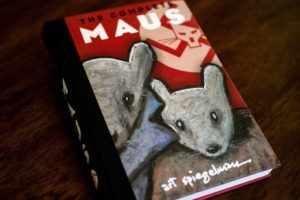 Book banning was a thing of the past. Something that you read about in the history books
while growing up. It doesn’t happen anymore. Right? Wrong. As of April 2022, book banning has risen once again, especially in southern states. One of the frequent targets is children’s (and young adult) literature, and the topics are almost always books written about black or LGBTQ+ characters. Why does this happen? Why is it happening again? Maus, a graphic novel by Art Spiegelman, that details his parents’ experiences surviving Nazi concentration camps, was banned in by a ten-member school board in McMinn

County, Tennessee. The book was intended to be part of its eighth-grade curriculum, and the board attempted to put a stop to it. Many other books that are marketed toward a young adult audience have been yanked from school shelves, including The Hate U Give, a book about police brutality and racism. The book has been adapted into a feature film and has been marketed all over the world. These books are being taken away from young children in an attempt to squash their learning, calling the writing “harmful” and “obscene”. But basically, it’s adults that don’t want children to think in other ways than that they want them to think. Censorship is one of the most brutal forms of control because it takes shape so slowly that people don’t necessarily realize what is happening at first. What’s rather fascinating though is once the news of this banning hit the headlines, the book also hit the top of the bestseller charts. More and more people were reading Maus, a book that I personally had not heard of until the day I read that headline and is now sitting on my bookshelf. (The book absolutely blew me away because of its largely different take on the most horrific event in history.) These bannings are having the opposite effect that conservative parents and politicians want them to have and local libraries and city libraries are attempting to help in any way that they can. When something valuable is taken away, people work harder to get it back. And so that will continue to happen, that will be the quiet rebellion in the days and months to come.