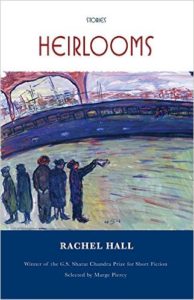 This past September, Gandy Dancer’s own faculty advisor Rachel Hall, had her collection of stories, Heirlooms, published. Heirlooms consists of stories written from the fictional viewpoint of Rachel’s mother and grandparents. The characters in the stories are Jewish and escape from an Occupied territory in France during World War II. In every story Rachel has recreated her family’s history; some of the information is true and some of it is stretched, but that’s the beauty of fiction. Readers will quickly notice the author’s brilliant writing style. Rachel’s use of characterization, dialogue, and description is what I found the most unique. The reader easily not only knows the characters individually but is able to sympathize with each one. There is not an overwhelming amount of dialogue in the book which made the conversations, such as the one between Berthe and Henri in “Generations”, come off so much stronger. My favorite aspect of the book is that Rachel is able to describe a large busy scene in just a few words. The first place this talent is displayed is in “Saint Malo” but it is expressed repeatedly throughout the novel. An example is when a house is perfectly described in one sentence in “Leaving the Occupied Zone.” It reads, “Inside, she breathes in the familiar smells of cooking and mothballs, her mother’s rose perfume, the faintest trace of the tobacco that was her father’s end” (46). In one sentence the reader gets a clear idea of a family. For a larger example of Rachel’s stories an excerpt from Heirlooms can be read here. I could go on and on about my favorite aspects of every story, but I decided that you may appreciate some words from the author herself instead. Following are some questions that I asked Rachel about Heirlooms:

Has it sunk in that you have a published novel? What has it been like to travel and do book signings?

RH: It’s been really thrilling to have this book come out, and I’ve been enjoying myself at readings and book signings in Columbia, MO, in Kansas City, in Rochester, and next week in NYC. I’ve been really touched by the responses people are having to the book and the questions they ask after a reading. It’s also really fun to see friends—people I haven’t seen in years, in some cases. The hardest thing is trying to catch up with these people and sign books at the same time, but I’m getting better with practice.

How did you determine what real information to use and what to make up?

RH: I grew up hearing many of these stories, but they often left me with questions that weren’t answered, either because my mother and grandparents couldn’t remember or because they avoided remembering certain feelings or events. So I had to invent when I didn’t have facts. For instance, in the story “La Poussette,” I made up the neighbor Sylvie Beauchard and her miscarriage. My grandparents did live in a farm in the Vaucluse region of France. They did try to buy some food from the neighbors who were suspicious of them and unwilling until they spotted my mother’s baby carriage, for which they were willing to trade some barley. I don’t know if those neighbors later reported my family to the police, but someone did, and my grandparents and mother fled to LePuy, where they lived until the end of the war.

Sometimes, I changed or rearranged things. My family didn’t live in Saint-Malo, but it’s my favorite place in the whole world. It’s a walled city with stone ramparts and wide beaches and waves the locals call “agitated” because they smack up against the ramparts at high tide.

Was there any true information that you decided to leave out for your family’s privacy or because the information just did not fit? Where do you as an author “draw the line” when deciding what personal information you want to share?

RH: I didn’t leave out anything, actually, for reasons of privacy. I did, however, on occasion heat things up or have my fictional characters act worse or be treated worse than the people who inspired them. I felt the stories needed these things to happen. When I did this—in “Leaving the Occupied Zone” or “White Lies,” I checked in with my mother. I’m not sure what I would’ve done if she’d been upset by these embellishments, but luckily she wasn’t. She said, “It’s fiction, you do what you need to.”

Was it difficult to create so many characters all with different personalities? How did you decide to write from multiple perspectives rather than one full story from Lise’s or Genny’s point of view?

RH: I found that writing Heirlooms as stories told from different characters’ perspectives kept the writing interesting for me. When I got stuck or bored with one character, I could move to another and tell their story. I really enjoyed writing the stories told from the perspective of characters other than the Latours. These characters—like Sylvie in “La Poussette” or Henri Duval in “Generations” or Magda West in “Block Party”—live lives that intersect with the Latours and they respond differently to the war or take away very different lessons.

Were you ever scared of what you might find while you were researching?

RH: This is an interesting question. I don’t think I was afraid, but on several occasions, I was deeply saddened by what I found. For instance, there is an official report of the events that are the focus of the story “Generations.” It was horrifying to read about the massacre, knowing that my grandfather was one of those killed. I’d known about the massacre for a long time, but the details in the report I read made it real and vivid and more terrible. Some details make it into the story—the men in charge really did drink champagne after they were done executing everyone. Also, there was a baby shoe found in the wreckage even though there weren’t any children killed there. Other details I left out because I think less can sometimes be more harrowing, more moving.

Is there any advice you can offer to others who enjoy writing historical fiction to help them stand out and be published?

RH: I think it’s important to do research about the time period you want to write about. Letters and journals were the sources I found the most helpful for learning about the ways people coped and responded to the war and immigration. I especially love letters for fiction because they have desire or yearning built in, and that’s what fiction needs: someone wanting something—safety or money or guidance or love or reassurance. Journals are great, too, for showing everyday life and providing details, which can open up a whole world.

As far as getting published, my advice is this: Don’t give up!

A novel always impacts its readers but it hits a little deeper when you know the author. I hope that Rachel’s comments will be helpful to those of you who are dabbling with historical fiction and need a little motivation. I know that reading Heirlooms and Rachel’s responses have motivated me. Heirlooms can be purchased on Amazon at https://www.amazon.com/dp/188615791X/ref=cm_sw_su_dp.