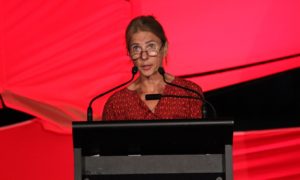 Lionel Shriver photo by Daniel Seed for The Guardian

Can fiction authors write outside of their own experiences? To ask the question is to answer it: Of course! It’s fiction, isn’t it?

At least, that’s what American-born novelist Lionel Shriver argued at the Brisbane Writers Festival on September 8 in her keynote address, “Fiction and Identity Politics,” which deals extensively with the concept of cultural appropriation.  I think her speech is worth reading in full, but I’ll attempt to summarize it: fiction writers have to use experiences outside of their own in order to write compelling fiction. “This is a disrespectful vocation by its nature—prying, voyeuristic, kleptomaniacal, and presumptuous. And that is fiction writing at its best,” Shriver says.

Of course, you’re damned if you do, damned if you don’t: include characters outside your various identity groups and you’re culturally appropriating; include none and you’re supposedly addressing a world where minorities don’t exist.

Shriver also makes an excellent point about the strangeness of cultural appropriation as a concept. She cites one definition—“taking intellectual property, traditional knowledge, cultural expressions, or artifacts from someone else’s culture without permission. This can include unauthorized use of another culture’s dance, dress, music, language, folklore, cuisine, traditional medicine, religious symbols, etc.”—to illustrate this. How is one supposed to get “permission”? Do authors petition ethnic minorities on the sidewalk until they get a couple hundred people to say that borrowing a non-English phrase is okay? The Guardian publishes columns on identity issues frequently—is a black female Guardian columnist saying that it’s okay for white women to wear cornrows enough to make it so?

Shriver ultimately notes that she is “hopeful that the concept of ‘cultural appropriation’ is a passing fad: people with different backgrounds rubbing up against each other and exchanging ideas and practices is self-evidently one of the most productive, fascinating aspects of modern urban life.”

I agree with Shriver that, taken to its logical conclusion, cultural appropriation spells the end of fiction. While not everyone will agree with me or her on this point, it seems clear that she’s not criticizing cultural appropriation from the political right wing. Nevertheless, before her speech was over, she was accused of racism, dehumanizing minority writers, and condescension, beginning with a column by Sudanese-born Australian memoirist Yassmin Abdel-Magied explaining why she left Shriver’s keynote address and went back to her hotel room to accuse Shriver of implying that minority writers “are less than human.” I will leave it to people who have read Shriver’s speech and Abdel-Magied’s reply to judge for themselves.

The Brisbane Writers Festival promptly organized a “right of reply” for those opposed to Shriver’s views held, according to the New York Times, “opposite a session … in which Ms. Shriver was promoting her new novel.” The rebuttal’s schedule precluded Shriver engaging in a debate with her colleagues about these important issues. The festival also accused her of “not speak[ing] to her brief,” or stated topic, in her address but did not describe the content of her speech or why it was objectionable.

It’s a shame that this debate couldn’t take place—I think the participants raise crucial issues, which are especially relevant to younger writers. Perhaps, as a history major, I’m reflexively allergic to suggestions that you should avoid writing on topics with which you don’t have personal experience (after all, as L. P. Hartley said, “The past is a foreign country,” and I haven’t been to the past before 1995).

The closest I come to agreeing with Shriver’s critics is when they note that books by non-“Western” authors tend to not get consumed in the “West” despite their valuable insights. However, their proposed solution views literature as a zero-sum game and ignores the impact of for-profit publishers, booksellers, and marketers. Criticizing white authors for writing on Korea, for example, just means fewer books on Korea, not that more books on Korea by Koreans get read. Carving out each identity group for only its members to write about isn’t the answer, and just serves to decrease the cross-cultural understanding which Shriver’s critics supposedly are trying to promote. It divides, rather than unites us.

Comments Off on Writing and Cultural Appropriation