Interview with the Author of Slats: The Life and Legend of Jimmy Slattery, Richard Blake

It’s hair-pulling, teeth-grinding, insomnia-inducing, head-on-the-desk difficult. Okay, maybe I’m exaggerating a bit, but sometimes it can feel like an abyss of technique, structure, style, and voice from which it is impossible to draw words.

In 2008 at the Buffalo Irish Center, I had the opportunity to talk to someone I now hold in high esteem, author and a family friend, Rich Blake, about this struggle. My father mentioned that Blake had recently published his nonfiction novel, The Day Donny Herbert Woke Up, and encouraged me to talk to him. Though at first I was nervous, once we got to talking about writing and publishing, I was overcome with excitement. From that conversation, I took away a piece of his advice:

I carry this mantra with me. In the seven years since, I’ve continued my journey as a writer, and have found myself as a nonfiction editor for our lovely Gandy Dancer. In light of Blake’s recent publication, Slats: The Life and Legend of Jimmy Slattery, it only felt natural to reach out for some insight into the world of writing.

From the proud city of Buffalo, New York, Rich 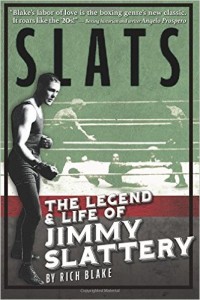 Blake is veteran financial journalist works who now lives in The Big Apple as the Global Content Director for Investor Intelligence Network. His writing on business and finance can be found across many publications and platforms, such as ABCNews.com and Reuters. He was a cofounder and executive editor of Trader Monthly magazine (2004-2009), and prior to that, he was a staff writer at Institutional Investor magazine (1999-2004). In 2004, Blake was nominated for a National Magazine Award in the Reporting category for a June 2003 cover story exposing mutual fund industry corruption.

Blake graduated with a degree in journalism from St. Bonaventure University in 1990. He began as a crime reporter for the weekly Alexandria Gazette in Alexandria, Va., and, later, as a general assignment reporter for the BVI Beacon in Road Town, Tortola (British Virgin Islands). In 2005, his nonfiction book Talking Proud: Rediscovering the Magical Season of the 1980 Buffalo Bills was published, and in a quick two years, his book The Day Donny Herbert Woke Up followed suit. He is also the coauthor of third work of nonfiction, 2010’s Diary of a Hedge Fund Manager. Just this year, Blake published his nonfiction book, Slats: The Life and Legend of Jimmy Slattery.

Publication is no easy feat, and as I expressed earlier, neither is writing. I had some for Blake about writing and publishing and Buffalo’s boxing hero, Jimmy Slattery.

Jordan Keane: What drew you to this story in particular?

Rich Blake: “When I was growing up, around age 12, I was a big sports fan (of the Buffalo Bills, in particular), and my dad used to say
‘Forget the Bills. Did you know that Buffalo once produced one of the greatest boxers of all time?’ My dad spoke enthusiastically about Slats, so much so that I became intrigued.”

Rich Blake says this in his author’s note: “After my father’s sudden passing in 2002, I came across a large cardboard box at his cottage in Angola, N.Y. Neatly piled inside were scrapbooks and binders stuffed with his collection of Slattery photos, clippings and memorabilia. Resting on the front of topmost black binder was a sheet of pale green paper. On it, in his chicken-scratch handwriting, my dad had underlined, Slats. He’d organized everything. Yet it would still be years before I took up writing this book.”

Research is essential to all forms of writing. Whether it’s to keep the facts straight or make sure the logistics are aligned, every writer resorts to research at some point. From the conversations we’d had during the brief time I spent in New York with him, I gathered that the research Blake faced was a true monster. It was historical nonfiction, after all. The intimidation would certainly have left me paralyzed, but Blake managed it.

JK: How do you tackle the research process?

RB: “From my dad’s collection, I had the starter kit I needed to vigorously search old newspapers, old books on boxing, and magazines. I relied on two research assistants, both librarians with access to a lot of resources. I consulted museums and archives such as the Boxing Archive at Brooklyn College—which was created when the ultimate collector, Hank Kaplan, died and left all of this stuff to the college. He had folders on Slats and many of Slats opponents. Then there were human beings I interviewed, including several of Slats relatives, even his son.

There was one day early in my research when I told a friend that I was embarking. He said, ‘I have a guy for you.’ He picked up the phone and rang up his pal, Luke Carr, who is the nephew of Slats trainer. Within a day, I was sitting with Luke at his home in West Seneca, getting a ton of information. Over the years I visited places such as where Slats trained in Speculator, New York in the Adirondacks. I studied old photos. I really did my homework so to speak.”

Already that’s a lot of work. And that’s just the research. With all of the research, there definitely needs to be time set aside to do the writing itself.

JK: How often do you write? Do you have a specific time or place?

RB: “I would say that for roughly five years I wrote in the early morning before work, and on Saturdays and Sundays, I carved out 3-4 hours to research and to write. Material was organized into folders, everything in folders was read and distilled into note cards, and note cards became the basis for very deliberate sections. All written by hand. A typical morning started at 6 am with a pot of coffee and just a very calm 1-2 hours. If I was stuck on something, I’d go for a long walk, think on it, and come back and write more. Handwritten pages were then re-handwritten, typed up, amended, edited, and rewritten. Some of my early chapters took an entire year. Some of my later chapters, as the deadline approached, were written in weeks.”

JK: What do you struggle with the most?

RB: “Unsolved mysteries. Slats died in 1960, and there were so many unanswered questions. I had to keep track of what I knew and what I lacked and fill in those blind spots. I knew that Slats first went to the Adirondacks to train in summer of 1925, a place called Hunter’s Rest in a town called Indian Lake. I knew that the hunting/logging camp was owned by a guy named Husson, who was married to a woman named Lucy St. Ong. I knew that Slats had a sparring partner named Vic St. Onge. It is logical speculation to make the leap that Slats found that exact training spot because of the connection to Vic St. Onge, but I never truly nailed that down. That is one example of what I call ‘nagging questions.’ Unsolved mysteries. I had to sort of write around that in a non-committed way, suggesting this connection but not expressly saying one way or another. There were so many great stories I was never able to truly confirm. What to use and how to couch it—that was a challenge. I was talking to a relative of Slats and recounted a very interesting story about Slats breaking out of a tuberculosis hospital and hitchhiking to Buffalo in his pajamas. He asked, ‘How do you know that?’ And the truth was, I heard it but did not know for sure it happened.”

JK: What advice would you give to aspiring writers?

RB: “Journalism doesn’t pay well, but you will be a better writer if you do it for a few years at least. You will get exposed to lots of subjects, how the world works.

Also, read. Read and look for ways other writers do certain things. The old adage ‘write what you know,’ I guess that makes sense, but ‘write what you want to read about’ might be a better take. If you are interested in women’s rugby, explore its origins. Who were the all-time great women ruggers? Be curious, hyper curious, make it a mission and enjoy the journey (the 6 am note cards, the quiet of the morning, each day a new day to build). Write well even in emails and texts. Strive to have flair and avoid clichés. Also remember I am 47, and only in the past ten years would I remotely consider myself as having gotten any good. You have to wait it out and keep at it. You are never going to wake up a great writer. It’s a process, a journey.”

To learn more about Rich Blake’s work, head over to:

You can find a great, and more in depth, review for Slats at:

Comments Off on Interview with the Author of Slats: The Life and Legend of Jimmy Slattery, Richard Blake