Lifting the Fog: The Road to Conquering Roadblocks When Writing

The blinking cursor is laughing at you.

What’s the matter, buddy? Can’t bring yourself to make a statement?

It happens to us all. Nearly every time I sit down to write, writer’s block creeps up on me at least once. My head, which was just twisting with sentences and characters, excited to get my ideas down on paper, goes completely blank. Eventually it lifts, like a dense fog rolling through, and I’m finally able to get started on my story.

An important thing to remember when afflicted with writer’s block or other writing detours is that, luckily, they’re not a disease without a cure. Depending on your goal, I’ve found there are different paths I can take that will help lift the fog and get my creative train rolling.

Anne Bernays and Pamela Painter published a fantastic resource for fiction writers in 1991, titled What If? Writing Exercises for Fiction Writers. In their work, both authors give several tips for conquering writer’s block, most revolving around the universal open-ended question of “What if…?”

The material covered in this book often helps me travel through the fog. Think of a turning point in your life. What would have happened if you had made a different decision? This can be anything from a major milestone, like going away to college, or something as minor as where you went for lunch the previous day. 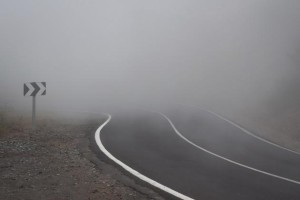 However, as many of us know, there is more than one problem that writers face when traveling down their creative road. Separate from writer’s block exists something I call “writer’s detour.” Sometimes, you have an idea and you’re in the middle of writing when suddenly, the fog descends and you can’t see ahead.

In cases such as these, I find that all that’s needed is a drastic turn in the narrative. I might change a character’s motivation or their backstory. I don’t worry about the outcome for now; instead, I just see where the new additions will take me. As the great E.L. Doctorow said, writing is “like driving a car at night. You never see further than your headlights, but you can make the whole trip that way.”

One of the most common problems, however, occurs when you’re sure that you have an idea and you know everything that’s going to happen. All of a sudden, the fog rolls through again and you’re struggling to get the ideas down on paper. Your head has a clear story, but your fingers aren’t working on the same side.

In this case, the best thing to do, at least for me, is outline. I’ve never been the type of writer to use a formal outline with Roman numerals or plot out a dramatic structure graph, but what I’ll often do is jot down key points that I want to hit for the rest of the story. A conversation, a discovery, etc. I’ll write these down in a different document and address them one by one. What would your character say in this conversation? How would he or she react to this discovery? I’ll travel through the outline until my creative juices are flowing again and I can’t write fast enough.

Overall, the key for me has always been to “go slow.” Take everything one sentence at a time, give yourself plenty of time. Don’t jam all your writing into a few hours right before your deadline when you’re drowsy and unfocused. Following these strategies should help you overcome the fog and craft a work of which you are proud.

Comments Off on Lifting the Fog: The Road to Conquering Roadblocks When Writing