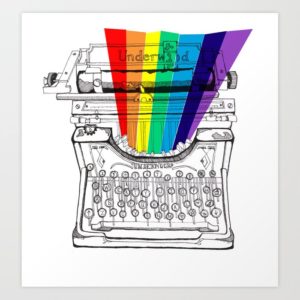 Alice Mattison writes: “Writing about people from any marginalized group can be scary. It’s also bad for your imagination to put limits on it. You ought to be free to become anyone when you make up a story” [sic] (74). This raises an age-old question: should non-queer people write about the LGBTQ+ community? If you asked fourteen-year-old, newly out Charlie, the answer would have been a hard “no!” Back then every queer person I saw on T.V. or in books were always written the same—as a gay, not a person. The only time I ever saw someone like me not as a stereotype was when I saw or read something written by another queer person.

But what about writing a gay or trans character in general? Well, then yeah. Go for it. We need more queer characters in all types of fiction! But there are some things to keep in mind while writing them. In Sara Devoe’s blog post, “Things to Consider When Writing Diverse Characters,” the general consensus is that it is important to ask questions concerning why you are writing this character. Like Devoe, I encourage you to evaluate the stereotypes associated with the specific group you wish to write as well as to look into own-voiced resources to give you a deeper understanding of the character.

Let’s go through these points step-by-step:

Is it just for diversity points? To make your book standout? Then cut it. Queer people don’t exist to fill quotas or be trendy: we are real people with real lives. Are you making a character trans just because it feels right? Then do it! Sometimes people are trans or gay. You don’t need a plot reason for this—there’s no plot reason for anyone to be queer in real life!

Obviously do not make your only gay character a flamboyant drag queen or your only bisexual character a raging sex addict. But “there are subtler stereotypes to avoid as well” like thinking that all gay or trans people think about is being gay or trans (Mattison 77). Or the ever-present lone gay in a group of straight people you see in every movie. (Fun tip: gays tend to run in packs; we all somehow always find each other like pack animals.)

To quote Dr. Jess Fenn from Devoe’s article: “I try to check my intention when I’m writing from a perspective that’s not mine. The colonizing imagination of ‘I can write whoever I want,’ when unexamined, is going to reproduce harmful power dynamics.” Don’t think just because you can write a character, you should. There are always some unconscious biases you may hold that you need to consider.

A helpful guide is the rule of two: always include at least two characters of a marginalized group to avoid representing the whole group through one person. If you have one gay man character who is a flamboyant drag queen, make sure to include another gay man who is, say, a carpenter who enjoys poetry on Wednesday and Monday Night RAW.

Are you reading gay authors? Trans authors? If not, then go grab some books! There’s countless of recommendation lists from a myriad of genres. One of the best ways to accurately write a character from another group is to read their experiences in their own words. You will never get anything more authentic than the real thing.

And finally, remember that queer people are exactly that—people! While being queer is a major part of my identity it isn’t the only thing: I’m a writer, avid Pokémon fan, dedicated friend and partner, and absolute hater of mint (it burns my poor mouth!). All of these aspects, though some more minor than others, build me into the person that I am. So, remember that when writing a queer person, that they are much, much more than their queerness.

Comments Off on Should Straight Cisgender People Write Queer Characters?

Tagged as diversity, LGBT, ownvoices, Queer characters, Writing, writing outside of self