This Angel on My Chest: a Book Review 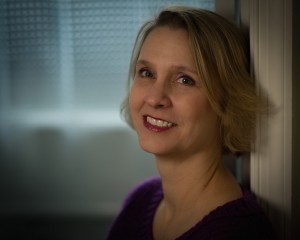 It might be somewhat hyperbolic to suggest that Leslie Pietrzyk’s newest collection defies literary classification, but there are few, if any, categories into which it seamlessly fits. This Angel On My Chest is a collection of unrelated short fiction pieces that read like a cohesive novel, and each story borrows so heavily from Pietrzyk’s personal experiences that it’s impossible to tell fact from fiction. It’s an oddball of a book that nevertheless elicits myriad emotions from the reader. Though at times emotionally draining, each piece – the whole book, in fact – is a masterwork of craft and an utterly raw exploration of grief.

Pietrzyk’s writing draws heavily from the sudden death of her husband at the age of thirty-seven. Each piece, ranging from one to forty pages in length, examines a particular facet of life for a young widow, moving chronologically from the immediate aftermath of her husband’s death in “Ten Things” to an eventual remarriage in “Present Tense.” Although no two pieces feature the same set of characters, Pietrzyk’s voice is evident both tonally and stylistically throughout the collection. This might be off-putting to some readers, especially if the book is read in a relatively brief timeframe, as the featured widow’s voices might begin blurring together.

Yet upon closer inspection, this is in fact the greatest mark of brilliance to be found in the collection: in unifying these sixteen different women through their struggles and their attitudes, the reader is forced to comprehend how isolating it is to be a childless widow before the age of forty. These women are utterly alone in this position – to be so abruptly widowed is a shock in itself, doubly so when one’s husband dies young; coupled with the isolation that goes hand-in-hand with grief, readers are left in an echo chamber of loss and bitterness alongside the narrator(s).

This is demonstrated most prominently in “A Quiz,” which takes its title from its format. Although lacking a traditionally linear plot, the story is an exploration of the unnamed widow’s interactions with friends, strangers, and acquaintances as she adjusts to life without her husband. Interestingly, it also utilizes the second person point of view to fuse the reader and protagonist into a single entity. Each section presents a hypothetical situation and asks how it ought to be handled: “You are at your friend’s wedding shower. She is one of your friends from college who you don’t see very often…you don’t really want to be here, but you had nowhere else to be and you didn’t want to be alone,” begins Question Four. “You are on your second glass of lemonade when one of the women sitting on the couch [beside you] asks, ‘Do you have children?’ Do you: A) Recognize that she wants to talk about herself and pertly ask, ‘Do you?’ B) Remark, ‘Yes, that’s what I heard too, rain for tomorrow.’ C) Answer calmly: ‘Not yet.’ D) Say, ‘No, I don’t, because my husband died of a brain aneurysm six months ago and he was only forty-two.’ The answer is D. Choose D.”

Each section concludes by telling readers that “the answer is D,” and further instructs them to always “choose D.” Never mind the fact that “choice D” always entails revealing the circumstances of “your” husband’s death in an increasingly inappropriate manner; the point is to demonstrate how stuck “you” are in the cycle of grief and how terrible it is to see the rest of the world behaving normally while “yours” has fallen apart. It’s an unconventional story and one of the more experimental pieces of writing in this collection, but it’s a treat to read if one can stomach the emotional punch it packs.

That is not to say, however, that This Angel On My Chest is loaded with unconventional storytelling and literary experimentation. There are a multitude of more straightforward pieces that follow a start-to-finish narrative, with “Do You Believe in Ghosts?” (wherein an unnamed widow contemplates the mutual infidelities in her marriage prior to her husband’s death) and “Slut” (in which a widow, Nicole, goes on her first date in years, only to run into her dead husband’s brother at the restaurant) being the standout examples.

But the crowning glory of this collection is “One True Thing,” a forty-page mammoth of a story 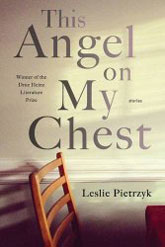 Pietrzyk’s collection is available for purchase on Amazon

that brilliantly plays with framing devices and point of view. In this story, a woman named Vanessa attends her first writer’s conference since the death of her husband Michael. While there, she encounters an old frenemy, Louise, whose successful writing career and personal history with Michael fan the flames of their rivalry. With every shift in point of view, readers learn more about the writers who gather at this convention and their tangled web of relationships, with a special focus on Vanessa, Louise, and the dead man who links them together. The “truth” alters at a breakneck speed; indeed, it’s impossible to discuss the finest points of the piece without spoiling its complicated narrative (or overwhelming the reader of this review, as nearly every possible excerpt requires some extensive context). Suffice it to say that readers will inevitably walk away from “One True Thing” with a fresh understanding of the power of language. It’s one thing to read eight stories, with each employing a singular point of view, but it’s another thing entirely to read one story featuring eight different types of point of view.

“Deciding who tells the story and how it gets told is the writer’s most important decision. There are countless ways to tell the same story, as many ways as there are people in this room,” Pietrzyk writes. “The story belongs to the voice telling it. That’s where the control is…Always be the one telling the story. Because you all know what happens next: along come the readers, with their interpretations and symbols and opinions and assumptions and questions needing answers. They really fuck it up for us.”

Perhaps therein lies the heart of this book. With the loss of their respective husbands, each widow in this collection is yearning for a sense of control in a situation they couldn’t have possibly prepared for. Maybe they tried to find it through aborted conversations with their ex-in-laws, or calculating what exactly they could buy with the life insurance check that just arrived in the mail. Whatever their method may be, it serves as an attempt to deflect the pitying stares “and opinions and assumptions and questions” they get from just about everyone they meet after the funeral. In crafting sixteen stand-alone stories that all come together in a singular emotional arc, Pietrzyk presents readers with a raw portrayal of her own healing process and sheds light on a badly underrepresented – and poorly understood – form of bereavement.

Comments Off on This Angel on My Chest: a Book Review