Make ‘Em Laugh: Discussing the Craft of Humor in Writing

Why did the chicken cross the road?

Alright, I won’t bore you with that tried-and-true classic or attempt a knock-knock joke either—as I’m sure you’ve heard them too many times to count. It’s important to note how arduous a task humor can be. For stand up comedians and actors, humor appears to be a natural reflex or an innate talent that is utilized to captivate their audience. So who’s to say that writers can’t make their readers double over with hysterical laughter through the written word?

As a blogger and writer, I find that being funny is hard work. As a reader, I wish more writers attempted humor. Certain authors like David Sedaris seem to have a knack for knowing what’s funny and a talent for conveying that sense of hilarity. I remember reading Sedaris’s “The Drama Bug” in a creative writing class and wondering why I had enjoyed it so much when discussing the story with my peers. Then I realized it was because Sedaris had done what not many writers can do and do well—he made me laugh. I admired how he seemed to effortlessly draw me in, recounting his childhood experiences with humor. I giggled quietly to myself as he described a mime’s performance in his class and chuckled at the absurdity of the young Sedaris proudly reciting Shakespeare as he vacuumed the living-room carpet in front of his puzzled mother, but I also felt his humor served as a medium for expressing something else—something more meaningful. In Sedaris’s case, it seems that he utilizes humor as a way to explore other implicit emotions such as his sense of dejection and alienation. However his humor is also powerful in its execution. The subtleties of his emotive experiences allow readers to connect to his work beyond the superficial exterior—ultimately forcing them to introspectively relate and connect.

Like fonts, humor comes in many different styles and can be appreciated or disliked depending on personal tastes and preferences. Humor can often be sarcastic, self-deprecating, satiric, witty, or even unpredictable. Many writers will often use a combination of styles and techniques, but what makes them unique and often memorable is how they use humor to find their voice and how we as readers place a value on that particular aspect. Sure, other funny writers like Tina Fey and Amy Poehler are also skilled in comedic acting and improvisation. However, their memoirs aren’t full of slapstick or sitcom tropes—they are in service of something more. I feel we place a value on humor in writing based on its ability to connect readers to a human experience. Just like stand up comedians, writers can take the most intimate details from their lives and turn them into relatable and entertaining scenarios that allow readers to escape and yet recognize aspects of our own humanity—perhaps from a different vantage point. For it seems there is an inherent value in humor that goes beyond the aspect of laughter. Writers who use humor employ that skill as a way to articulate honestly and as a means to create intimacy—inevitably forcing us to recognize the truth and versatility of our own life experiences—the parts that make us human. 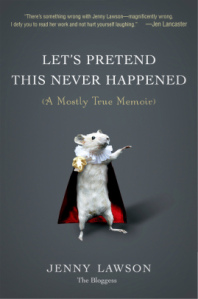 Even the cover art is hilarious!

Over the holiday break, I had the chance to take a break from studying textbooks and actually read what I wanted at my leisure. That’s when I picked up Let’s Pretend This Never Happened: A Mostly True Memoir by Jenny Lawson (aka The Bloggess “Like Mother Theresa, only better”) and reveled in her comedic genius. From her bad behavior at funerals, to wearing bread sacks for shoes as a child, to having her first child, Lawson had me laughing out loud at every turn. She possesses the uncanny ability to turn her everyday experiences and outlook on life—however strange it may be—into a gripping read that made me cling to every word in anticipation of the next surprise in her sardonically driven narration of events. Perhaps what is so striking about her writing is the honesty of her voice. Lawson writes, “I can finally see that all the terrible parts of my life, the embarrassing parts, the incidents I wanted to pretend never happened, and the things that make me ‘weird’ and ‘different’ were actually the most important parts of my life. They were the parts that made me ME.” This awareness allows her to make fun of herself. When describing her engagement, for example, she writes, “When I was in junior high I read a lot of Danielle Steele. So I always assumed that the day I got engaged I’d be naked, covered in rose petals, and sleeping with the brother of the man who’d kidnapped me.” There are so many other hilarious tidbits I could quote, but instead, I recommend you go grab a copy for your own enjoyment. Trust me, you won’t regret it!

So how do Jenny Lawson and David Sedaris write with humor so well? In a blog from the Huffington Post, author Siobhan Adcock suggests that in order to master the comedic craft, every writer should take a humor writing class. Adcock argues that studying humor in a structured course teaches writers the fundamentals: That we read to be surprised, that predictability is a writer’s downfall, because delivery is crucial, and because it is more difficult to be funny than sad. Perhaps what is most intriguing about this concept is how it would allow writers to find their own voice through trial and error, inevitably pushing one to become a better writer because of it. In the meantime, I guess I’ll just take Sedaris’s advice by continuing to read other writer’s work whose humor inspires me and “simply sit back and learn.”

Comments Off on Make ‘Em Laugh: Discussing the Craft of Humor in Writing