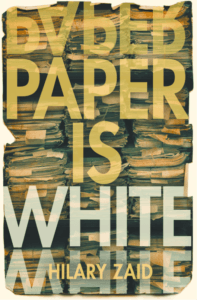 Before going to guest novelist Hilary Zaid’s forum on her novel Paper is White, I didn’t know much about the book besides what I looked up on the Internet beforehand, to be honest. It’s nothing against Zaid or her novel, but amid the seemingly never ending amount of classwork reading and the encroaching midterm season, I don’t have much time to causally read, unfortunately. What did draw me to the forum was that I knew the novel dealt with LGBTQ+ topics, an interest of mine, and I wanted to hear about how a novel that’s main conflict is solved by the legalization of gay marriage still finds purpose today. Well, I can say that I went into the reading interested but left making a beeline to my apartment to order the book on Amazon (I forgot my credit card, otherwise I would have bought it at the event). Here’s why…

In the beginning of the forum, Zaid said that the novel is one about “silence,” “secrets,” and “omissions.” I found this refreshing. Why? Because most of the LGBTQ+ poems and books that I have read focus more on the “loud” aspects of identifying as queer. This often includes the ostentatious familial pushback against coming out and the psychological trauma that accompanies society’s refusal to accept. That and the LGBTQ+ community is also usually associated with vibrancy, flamboyancy, and loudness (think Pride parades) in popular culture which is a non-representative stereotype but still works its way into the public consciousness as being “gay.” I understand where this comes from, being part of the community myself, but there’s more to living in a hesitant-to-accept society beyond the formulaically loud “coming out story” that popular culture seems to enjoy telling. For the pop culture fans, Zaid’s novel is especially reminiscent of Hannah Gadsby’s Nanette, a comedy special on Netflix that deals with similar issues. You can read a Wired article about the special here, if you’re interested.

Going back to Zaid, her novel deals with some of these “louder” issues in one-way or another, sometimes indirectly, but the focus is more on secrecy between two people who are already “out” to each other. This is what most of the forum discussed, after all. As Zaid noted, the novel highlights more introspective issues such as, does your partner need to know everything about you and vice versa? If not, then what can be omitted in a relationship? From what I gathered at the forum (and while reading, now that I own the book) Paper is White doesn’t smack the LGBTQ+ label onto the relationship to make it nuanced, rather it focuses on relationship dynamics that happen to be between lesbians. Real-life experiences and character development give the plot the necessary nuance that makes Paper is White a must read.

(Click Hilary Zaid’s website link above, or here, to learn more and to see if she’s doing a reading near you, I recommend it)