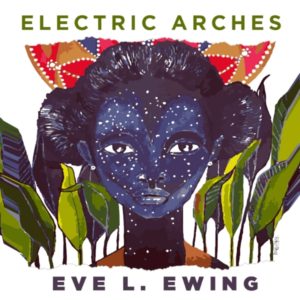 In her first book of poems, sociologist Eve L. Ewing takes the reader traveling through time. Beneath its stunning cover by Trinidadian artist Brianna McCarthy, Electric Arches reveals magic powers and “moon men,” machines that let you speak back into history and receive voices of the past. It traces the legacies of historic African American figures to the routine and daily struggle of black people facing abuse from police and civilians alike; the past and present of black America bleeding together and reaching, stretching out to hopeful tomorrows.

In “The Device” Ewing creates a vision of the near future as black people across America come together and build a machine to realize their communal dream—which is at once miraculous and tellingly humble—to hear from their ancestors, whose voices have historically been silenced. The overarching desire to uncover or recover history, identity (something so many of us take for granted) continues throughout the collection, cultural narratives crossing over with those of womanhood and coming of age, experiences told through the lives of Koko Taylor and Matthew Henson, adolescence against a backdrop of Prince and Erykah Badu.

There is something amazingly intimate in Electric Arches. Ewing rhapsodizes on the mundane with poems like “Shea Butter Manifesto” and “Ode to Luster’s Pink Oil,” celebrating the rituals of her childhood and showing the familiar and the familial. These simple routine acts of personal grooming express the love of a mother, or the affection of a sibling. In “What I Talk About When I Talk About Black Jesus,” Ewing expresses the culture of religion-as-community, how it’s more about the people at the church than the sermons inside it—faith not in the Nazarene but in a grandmother in her Sunday clothes.

In “four boys on Ellis [a re-telling],” one in a series of retellings addressing systematic racism, a scene that is unfortunately familiar to any one of us: three young black boys, children, are detained by police. Before the story ends, however, the text is interrupted by Ewing’s own handwriting, scrawling a different path: she imagines the power to fly them away, willing them happy and unafraid, riding their bikes through the sky like E.T. She imagines them back home with their mothers, “eating cereal and watching Naruto” (because of course, of course they’d watch Naruto.)

At once tragic, joyful, and humorous, Ewing’s words convey tenderness and affection and near reverence for her subjects. One can find familiarity here, in that tenderness, and even if parts of the world she paints are alien to you (especially then), listen, and watch as she wills new endings into existence.