The Learning Curve: Reflecting on Growth as an Editor

Ask any writer about their writing from high school and their general reactions are likely to be the same: embarrassment. As a general rule of thumb, working in any creative field is a never-ending, slow upward climb that can make the experience of looking back either gratifying or mortifying (and sometimes both). My different experiences working on literary magazines have taught me similar lessons about being an editor. 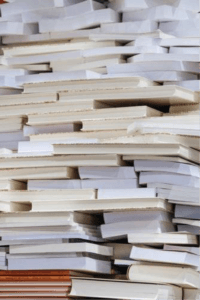 My high school was very small, but our literary magazine, The Mast, had been around for decades. The club was run by our English teacher, Mr. Seffick, a patient soul who suffered alongside us on our creative journey.

One of the most obvious distinction between The Mast and Gandy Dancer is the disparity in resources. The Mast was lucky to hold a meeting of 10 members and submissions largely came from the staff. The class that produces Gandy Dancer is lucky to have 20+ students and can still feel under-staffed sometimes. The Mast did not use Adobe InDesign. Instead, we would physically lay out the magazine and then entrust the physical copy it to the two students who knew how to work Photoshop. Our online presence was nil simply because we didn’t have the time or understanding to create a good blog, though our technical squad did occasionally post videos calling for submissions.

Besides the writing done by members of the club, we mostly received works by people looking for extra credit in English. Due to this policy we received an almost sinful number of photos of sunsets, poems about the seasons, and, once, sports predictions written on a napkin. Admittedly, Gandy Dancer receives some outlandish submissions but at least those are genuine pieces created for the sake of artistic expression.

Young editors can have the same lack of understanding of aesthetics and technique that young writers have. One thing Gandy Dancer tries to avoid is placing images next to texts that feel too directly connected, which creates a “picture book effect.” Nobody told those of us at The Mast this rule. Our choices for the layout was often very picture book. We once printed a photo of Beyonce in concert on the centerfold. I stand by that decision, but perhaps it goes against a more mature aesthetic.

The editors of The Mast may not have known about the more mature practices and design programs used by editors of the Gandy Dancer, but both magazines devote themselves to showcasing the creative voices of students. Without being editor of The Mast in high school I would have known how much I enjoyed the collaborative pursuit of creating a literary magazine. No matter how much I have improved, starting the journey is something I am proud of.

Comments Off on The Learning Curve: Reflecting on Growth as an Editor