Adventures in Albuquerque: A Reflection on the 2015 Sigma Tau Delta Convention

Last week, as everyone else was making their way to warm vacation spots (or home!) for Spring Break, 16 other Geneseo students and I landed in Albuquerque, New Mexico for the 2015 Sigma Tau Delta International Convention. If you’ve never heard of it, Sigma Tau Delta is the International English Honor Society for undergraduate students (and yes, our initials spell out “STD.” Advice to people thinking of applying for the 2016 convention: don’t google “STD Conference,” you won’t get what you’re looking for).

A conference for English majors is pretty much what you’d expect: a bunch of college-aged students and their professors (shout out to Dr. Paku and Dr. Woidat for making the trip with us!) sitting around, debating theory and literature and authors. There are two types of panels at STD’s conference: analytical and creative. Most of the creative panels were broken down by genre, although there were a few mixed-genre sessions, and the analytical panels were broken down by category (British Lit, Modernism, Alt Lit, etc.) and theme.

I read my CNF essay, “Transdifferentiating Cells,” at a mixed-genre panel on Saturday, the last day of the conference. In the essay, I essentially compare epilepsy and jellyfish (I know, I know, it sounds crazy) in an exploration of identity and illness. Saturday night, after the last session of panels concluded, celebrated Native American author Leslie Marmon Silko gave a lecture/reading and then the conference held their Red & Black Gala Dinner and Convention Awards Ceremony.

At the ceremony, I was stunned and honored to win 1st place in Creative Nonfiction as well as Best Overall Convention Paper. Essentially, what this means is that my essay was chosen by two different groups of judges as the best from 5 panels of creative nonfiction (and whatever nonfiction was read in the mixed genre panels), as well as the best overall submission from the roughly 900 papers and creative works accepted into the conference. So…yeah, kind of insane. Sometimes, I don’t know how to deal with my emotions when I’m excited or overwhelmed—which is probably why I write nonfiction, as it helps me process my feelings and reactions. So, this happened after the ceremony ended: 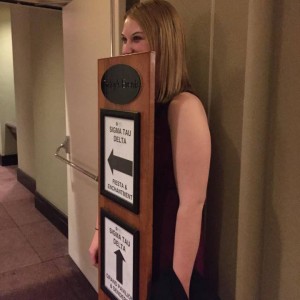 As you can probably tell, I’m still in shock over the awards I won last week. Although I’ve been working on expanding and revising this essay with Professor West since I wrote the first draft last semester for a Lyric Essay class I took with him, there were so many fantastic submissions across every category (shout out to fellow Geneseo senior Ben Wach for getting first place in the Critical Theory category) that it never even crossed my mind that I could potentially win something. In fact, I was so taken off guard during the awards ceremony that after winning Best Paper I forgot how to breathe and legitimately almost passed out.

But, in all seriousness, the Sigma Tau Delta Conference came at the right time for me. Although it’s cliché to say, it is hard being a writer—anyone who’s spent longer than a semester working on one piece will tell you that—and sometimes, in the middle of a fifth or sixth or tenth revision, you can lose sight of why you’re actually working on something. Going to Albuquerque, being able to share my writing with others who have similar interests, meeting people from other schools and having the opportunity to listen to their own work, all reminded me that I’m not in this alone. And that there are a lot of people out there who actually care about what I have to say and write.

I’m graduating at the end of this semester and although I’m taking a year off to work on MFA applications, it’s frightening to see some of my friends who are going through the process now—and who I consider to be fantastic writers—get rejections. And I know, realistically, that rejection is in my future—both in regards to MFA programs (no one gets into every school they apply to), and in regards to submitting to literary journals. But as I begin to enter the MFA process myself, the recognition I received at the Sigma Tau Delta conference is a huge encouragement for me to keep working on what matters most: my craft.

Katie Waring is a senior English (Creative Writing) major at SUNY Geneseo originally from eastern Long Island. She was the Managing Editor of Gandy Dancer 3.1 and currently reads nonfiction for The Rumpus and Hippocampus. Katie is at work on her first book, which focuses on epileptic colonies and eugenics in early twentieth century America, and can be found on Twitter. Her graphic essay “Open Diary” will be featured in Gandy Dancer 3.2.

Comments Off on Adventures in Albuquerque: A Reflection on the 2015 Sigma Tau Delta Convention