As You Read This, I’m Already Dead: Writing and Video Games

As far as I can discern there are three kinds of video game writing: “In,” “About” and “For.” “In” and “For” deal directly with the production of a video game whereas “About” takes video games as inspiration and creates a separate object such as a poem or essay or story. Although writing in video games, that is, writing the text or dialog that actually appears in the game, is part of the process of writing for video games, the two are distinct enough to deserve separate attention.

The lines are blurry. A poem or story can certainly lay down the conceptual framework for a game, such as Robin Mendoza’s “JumpJudge IX: Chaos in the Court” in which the poem’s titular character discusses advancing video game technology. Similarly, the industry itself often ignores the differences between for and in. When directors and producers of video games reduce the job of someone writing for a video game to someone writing text/ dialog in game a lot of crappy work is produced. The writer essentially becomes an epigrammist. Darby McDevitt, lead writer of the Assassins Creed franchise at Ubisoft Montreal, in his article “A Practical Guide to Game Writing,” describes writers in this situation: “barred from having input into its pacing, its setting, the motivations of its characters, and its mood and tone, writers resort to the only weapons they have left: wry witticisms and declarative pop-philosophy.” The result is that players are left with one dimensional characters and schlocky stories. Many video games don’t need complex characters or narratives to be fun, or even moving, so many studios aren’t concerned with the quality of writing in their games. I can’t even say that all of my favorite games utilize complex writing unified with design. Some, like Shadow of the Colossus, do it with simple stories and almost no dialog. However, in games like Silent Hill 2, where the wonderful and uncanny writing completes the psychological horror of the foggy streets and darkened hallways, the effect is powerful enough to stick around in my dreams for weeks, and my own writing to this day. 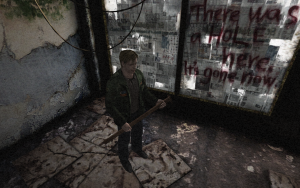 “JumpJudge IX: Chaos in the Court” represents a piece of writing that incorporates video game design into its form and content. As I mentioned earlier, JumpJudge discusses the difficulties of adjusting to new worlds every time technology advances the complexity of perspective. Advancing from 2D, to orthographic projection, to 3D, the poem ends on an uncertain look at the future when JumpJudge mentions the Oculus Rift, a developing virtual reality technology. In form the poem feels like an older game that uses text boxes instead of spoken dialogue because of technical limitations. This effect is created primarily by the line breaks, that make each line seem like a new section of text scrolling into the text box, and the all-capsing of important objects/concepts. This poem exemplifies the “unified experience” that McDevitt urges writers and designers to create by cooperatively discussing elements of game design such as “story, characters, dramatic set-pieces, and settings.” Although it does so in a backwards sort of way because the design of the hypothetical game serves the design of the poem, whereas when McDevitt asks us to think of writing as design, and for writers in video game production to be thought of as associate designers, he does so knowing that “a great story with terrible gameplay will die a fast and lonely death on the shelf… Gameplay must come first — this is the golden rule.” A wonderful example of synched writing and design serving the gameplay is Tower of Heaven (and you can play it in your browser right now if you press the link!).

You play a circle-headed character seeking the top of God’s tower. As you ascend God begins to decree rules that change the gameplay like “Thou shalt not touch golden blocks.” The narrative and gameplay are even further intertwined when God tells your avatar that it must lose its humanity in order to gain the reward at the top of the tower, so you may not touch any living thing. Afterwards you must dodge the butterflies, flowers and grasses scattered throughout the levels.

It’s harder to discern the status of writing about video games because it’s such a niche. However, if the existence of Cartridge Lit, an online literary magazine dedicated to writing about video games, has anything to say about it then it is a thriving niche. They’ve published poems about the educational game The Oregon Trail by Jeff Handy (who has been published previously in Gandy Dancer), short fiction about the classic DOOM and an entire chapbook about the devilishly hard Dark Souls. Cartridge Lit is relatively new on the scene, but they are giving this niche the space it deserves; with a print anthology coming out in November, exciting things are happening.

My own experience of the way writing about video games is received is limited to how my friends and my peers in workshop have responded to my own work about video games. Happily, they were well received and encouraged, and there was another poet submitting similar work! From my friends the response was similarly positive in general, but I would sometimes be asked some form of the question “Why write about video games?” I would respond “Why write about sculpture, paintings or plays?” But I’m veering now into the “are video games art?” debate that so many have weighed in on before me, some more infamously than others.

Comments Off on As You Read This, I’m Already Dead: Writing and Video Games