What We’re Reading: The Opposite of Loneliness

The Opposite of Loneliness is a collection of essays written by Marina Keegan, a writer who died five days after her graduation from Yale, at the young age of twenty-two. I would assume that as a young writer, Keegan didn’t write her essays knowing they would become a New York Times best seller. She wrote for the same reason that many of us do – to attempt to make something of the world around us, to attempt to make something of ourselves. Keegan’s writing speaks of what it means to be a writer, as well as what it means to be human. 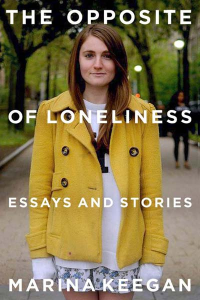 She creates a sense of intimacy and realness that is hard to come by. Both the way she wrote and the ideas that she wrote about remind why I write, why I read, and the importance of Gandy Dancer and all literary magazines. Sharing our ideas and reading the ideas of others creates a web that Keegan describes as “elusive, indefinable, [and the] opposite of loneliness” because it reminds us that we are far from alone even though the world sometimes makes us think otherwise.

Keegan’s work reminds me that we don’t write because we want to be famous; we write because we have something to say that hasn’t been said and demands to be heard. Keegan’s essays shed light on the often cruel world of literature. In one of Keegan’s essays, “Song for the Special,” she writes, “I’m so jealous. Unthinkable jealousies, jealousies of the Pulitzer Prize-winning novel I’m reading and the Oscar-winning movie I just saw. Why didn’t I think to rewrite Dalloway.”

Her essays brought us one step closer to the opposite of loneliness. Her essays capture the feeling “that there are people, an abundance of people, who are in this together. Who are on your team.” This is why I write – not for recognition, fame or praise – but to foster human connections and, hopefully, make at least one person feel like there is somebody out there who feels the same way. So if you get another rejection or even worse, you don’t hear back at all – consider Marina Keegan’s legacy and recall why you started writing in the first place.

Comments Off on What We’re Reading: The Opposite of Loneliness

Tagged as Gandy Dancer, loneliness, Marina Keegan, Reading, The Opposite of Loneliness, what we're reading, Writing